Richard B. Brown, dean of the College of Engineering at the University of Utah, was honored with the Rosenblatt Prize for Excellence, the U’s highest faculty accolade. The $50,000 cash award is presented annually to a faculty member who transcends ordinary teaching, research and administrative efforts.

A group of distinguished faculty members on the Rosenblatt Prize Committee recommended esteemed colleagues for consideration, and university President Ruth V. Watkins made the final selection.

“I am pleased to honor professor Brown with the University of Utah’s pinnacle faculty recognition,” said Watkins. “He is internationally respected for his pioneering research and exceptional leadership as dean. He is also beloved by his students, faculty and peers, and acclaimed by legislators and governors of Utah.”

The lowdown on Richard Brown 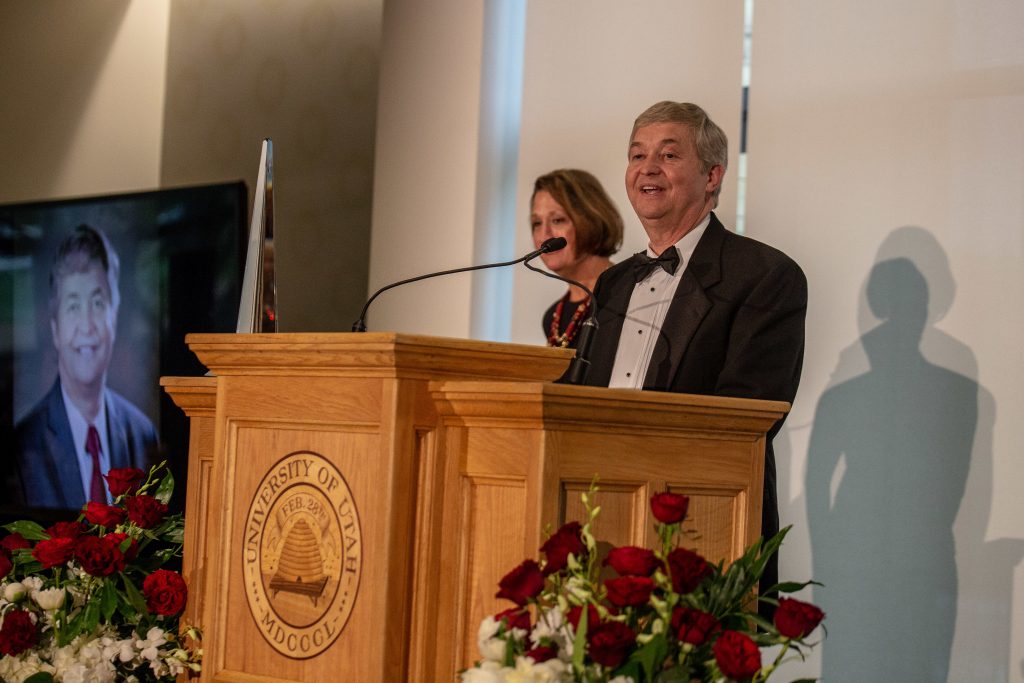 Brown accepts the Rosenblatt Prize for Excellence at the Honorary Degree Dinner at the Alumni house.

Although Brown’s research focuses on miniature technology, his impact on society has been massive.

“Dean Richard Brown has had an absolutely outstanding career that would do real credit to the Rosenblatt Prize. He has pioneered both solid-state chemical sensors and high performance low-power microsystems and has made critical contributions to both areas,” said one colleague in a nomination letter. “I very much admire Rich as a person, as a researcher and as a top-level academic administrator. He’s a real gem.”

While pursuing a doctoral degree at the U, Brown began his pioneering research on solid-state chemical sensors. In 1985, he joined the University of Michigan faculty where he and his students developed miniature ion-selective electrodes, enzymatically- and immunologically-coupled sensors for complex biological molecules, and amperometric sensors for heavy metals such as lead and arsenic, and neurochemicals such as serotonin and dopamine. His group was first to incorporate both electrical and chemical sensors on silicon brain probes, and first to differentiate spoken words from an array of microelectrodes on the surface of human brains. Brown’s research group has also made real breakthroughs in integrated circuits, from high-speed microprocessors to low-power, implantable electronics that include a computer, radio, memory, clock generator and sensor interfaces all on a single silicon chip.

The scholarly and commercial impact of Brown’s research is impressive; he has authored 225 peer-reviewed publications, one of which has been cited more than 3,400 times, according to Google Scholar. He and his students have founded four companies, including his current startup e-SENS, based in Research Park, which develops sensors for monitoring the nation’s water supplies. Another of these companies, i-SENS, sold 1.7 million glucometers and 1.4 billion one-time-use test strips last year. For his achievements, Brown has been elected a Life Fellow of the IEEE, a Fellow of the National Academy of Inventors, and has received numerous other awards, including the Governor’s Medal for Excellence in Science and Technology. 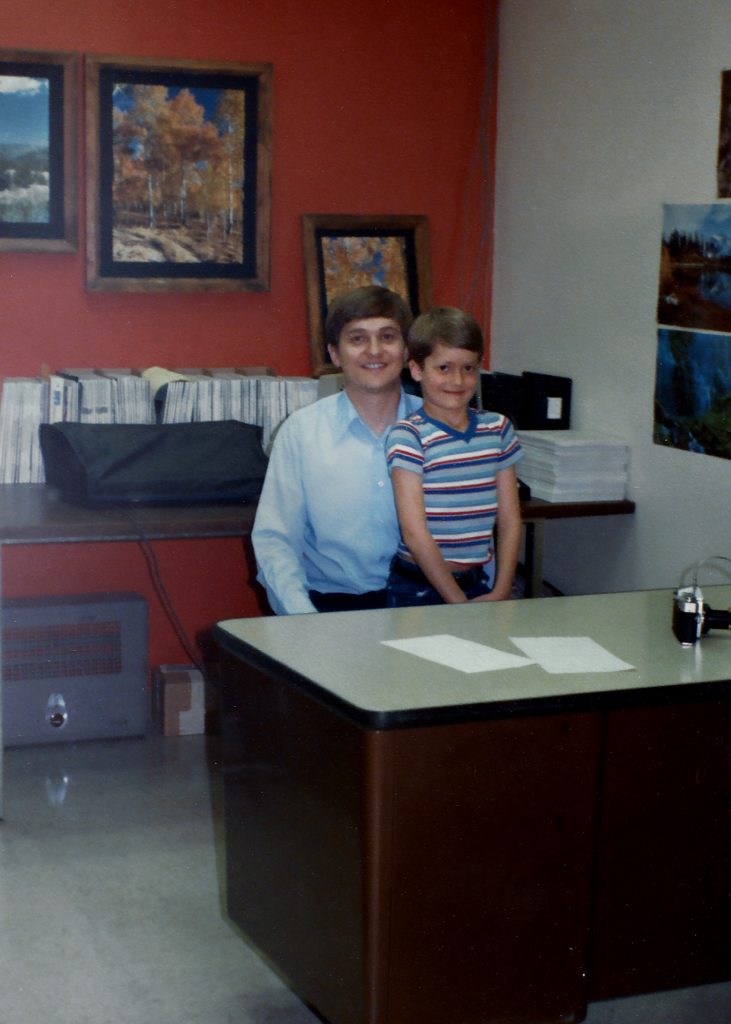 Richard Brown in his office in the Merrill Engineering Building as a doctoral student, with his son, Ryan, who was eight at the time.

Brown’s impact on education extends far beyond the University of Utah; his 31 doctorate graduates have become leaders in their fields, and his innovative integrated circuit design curriculum changed the way this topic is taught. “Rich’s courses at both the introductory and advanced levels are so exemplary that they have been models for courses in [electrical engineering] departments across the country and, indeed, in other countries,” a colleague noted in a nomination letter.

Since his arrival as dean of the College of Engineering in 2004, Brown has been celebrated for raising the level of academic excellence in the college, and growing the quality and number of graduates. During his time as dean, research expenditures have grown from $30 million to $82 million per year, peer-reviewed publications have gone from 398 to 883 per year, the number of graduates has more than doubled from 484 to 1,011, and the number of freshmen coming into the College of Engineering has grown from 7 percent to 20 percent of the U’s total freshman class.

A colleague noted, “Professor Brown is truly a renaissance leader whose scope of accomplishments ranges from fundamental technical contributions, to success in technology commercialization, to the skillful leadership of the College of Engineering during one of the most accelerated periods of advancement in its history.”

About the Rosenblatt Prize for Excellence

The Rosenblatt Prize for Excellence is an endowed award, given annually to a member of the faculty at the University of Utah, “to honor excellence in teaching, research and administrative efforts, collectively or individually, on behalf of the university.”

The endowment was created to honor Nathan and Tillie Rosenblatt, on the centenary of their immigration to Utah, and in recognition of their legacy of civic leadership and generosity. Originally established in 1983, the award was later increased by Joseph and Evelyn Rosenblatt and their family. The endowment and its gifts ensure the annual award of $50,000.