A specimen of Lystrosaurus from the Albany Museum in Grahamstown, South Africa.

Two hundred and fifty-two million years ago, a series of Siberian volcanoes erupted and sent the Earth into the greatest mass extinction of all time. As a result of this mass extinction, known as the Permo-Triassic Mass Extinction, billions of tons of carbon were propelled into the atmosphere, radically altering the Earth’s climate. Yet, some animals thrived in the aftermath and scientists now know why.

In a new study published in Scientific Reports, a team of international paleontologists, including postdoctoral scholar Adam Huttenlocker of the Natural History Museum of Utah at the University of Utah, demonstrate that ancient mammal relatives known as therapsids were suited to the drastic climate change by having shorter life expectancies and would have had a better chance of success by breeding at younger ages than their predecessors.

The research team studied growth patterns in therapsids from the South African Karoo Basin, a paleontologically significant area which preserves a wide range of fossils from the Permian to the Early Jurassic, or 300-180 million years ago.

By examining their bone microstructure before and after the extinction boundary, Huttenlocker and his colleagues were able to study how growth patterns in therapsids were affected by the extinction. By studying body size distributions in particularly abundant species from the Permian and Triassic, the team was able to interpret shifts in size class structure and in rates of survivorship. 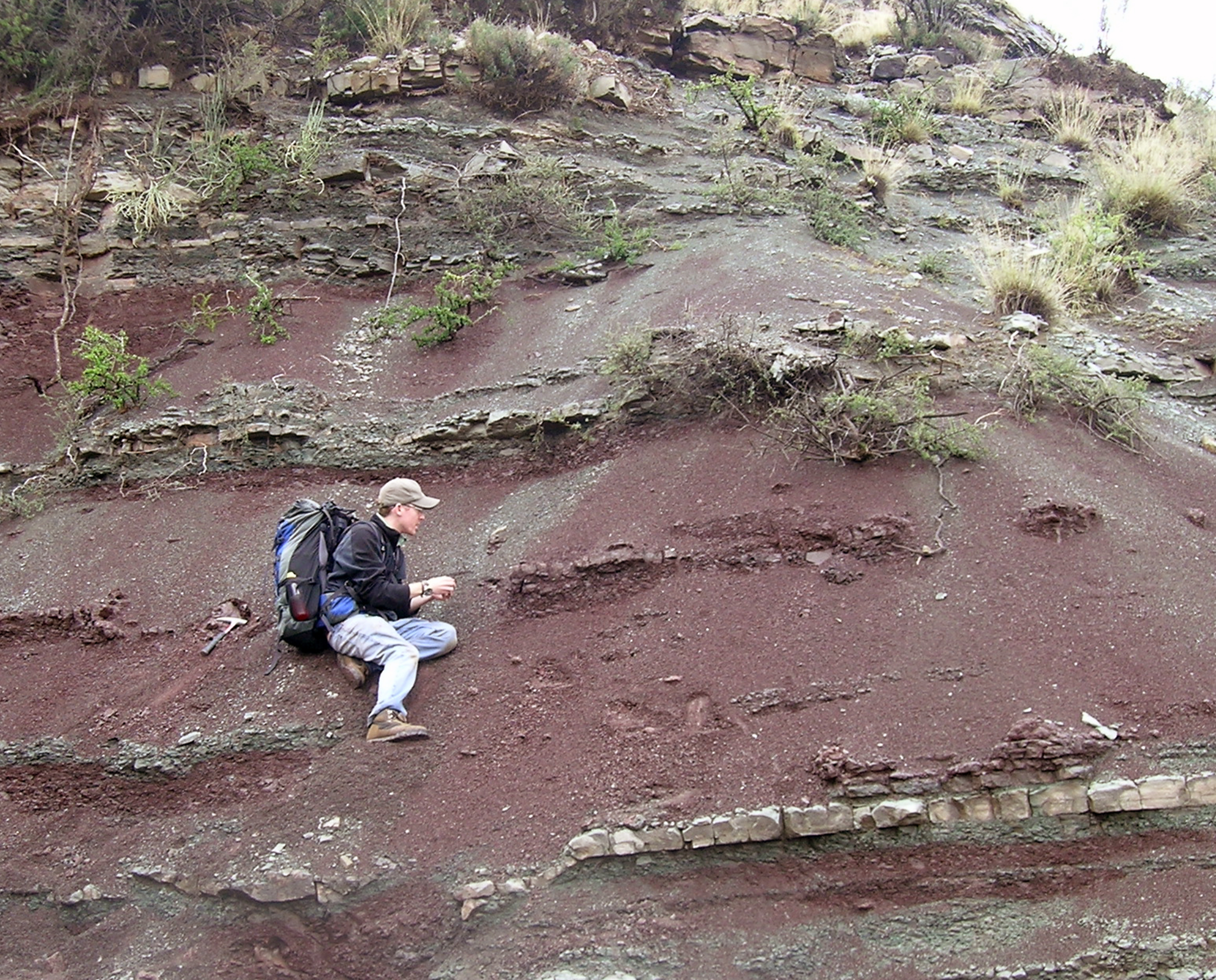 Adam Huttenlocker taking samples at the top of the Permian at one of the study sites.

In this study, special attention was paid to the genus Lystrosaurus because of its success in surviving the Permo-Triassic extinction; it dominated ecosystems across the globe for millions of years during the post-extinction recovery period, and makes up some 70-90% of the vertebrate fossils found in Early Triassic rocks in the Karoo.

“Therapsid fossils like Lystrosaurus are important because they teach us about the resilience of our own extinct relatives in the face of extinction, and provide clues to which traits confered success on lineages during this tubulent time. Lystrosaurus was particularly prolific, making it possible to build a large dataset and to sacrifice some specimens for histology to study the growth patterns recorded in its bones,” said Huttenlocker, one of the paper’s authors.

“Before the Permo-Triassic extinction, the famous therapsid Lystrosaurus had a life span of about 13 or 14 years based on the record of growth preserved in their bones,” said Field Museum paleontologist Ken Angielczyk, another one of the paper’s authors. “Yet, nearly all of the Lystrosaurus specimens we find from after the extinction are only 2­–3 years old. This implies that they must have been breeding when they were still [relatively young] themselves.” 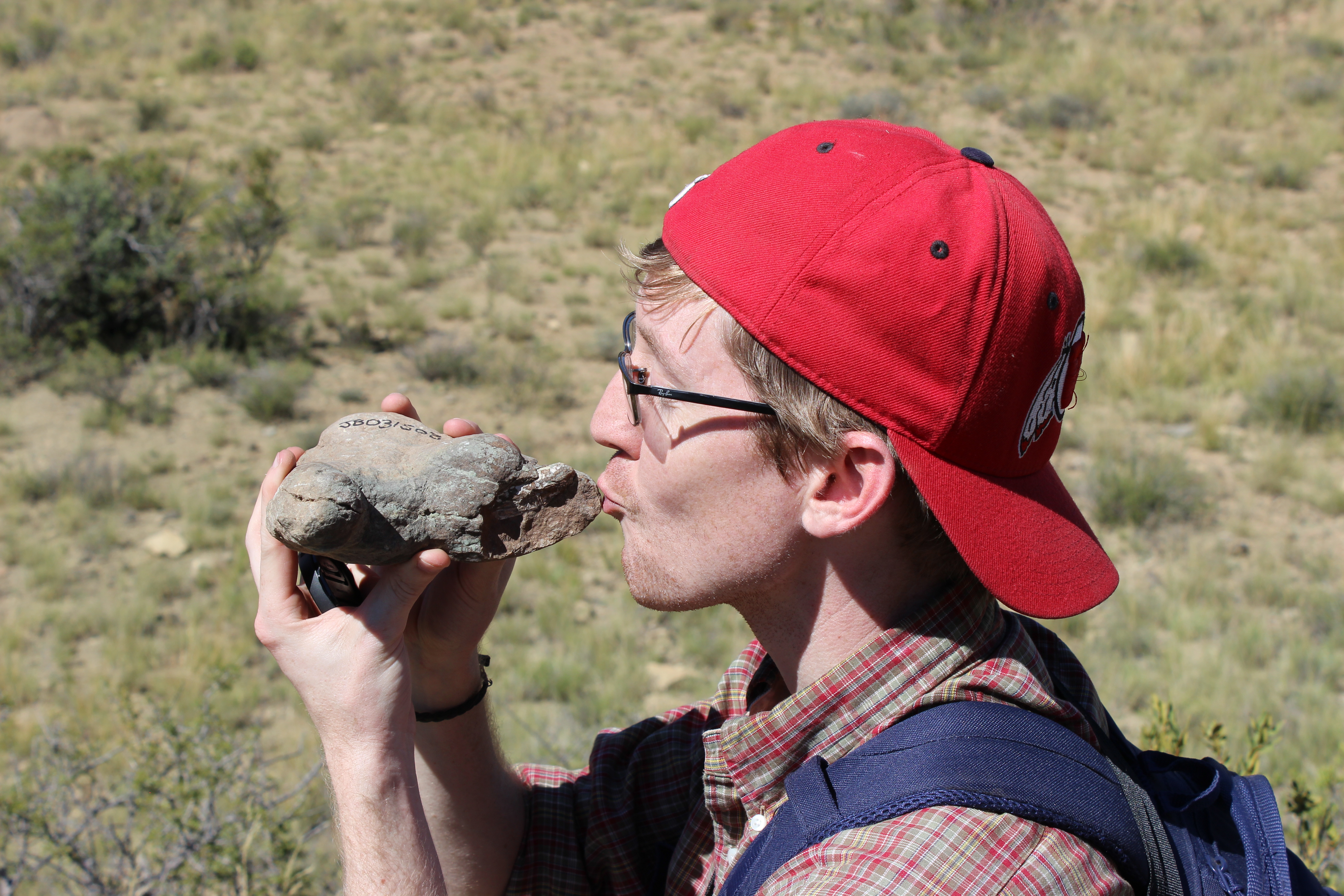 Adam Huttenlocker identifies a small therapsid fossil at one of the study sites.

This adjustment in life history also meant a physical change for Lystrosaurus. Before the mass extinction, this creature would have been a couple meters long and weighed hundreds of pounds—about the size of a pygmy hippo. Post-extinction, its size dropped to that of a large dog, in large part due to its altered lifespan. Yet, these adaptations seemed to pay off for Lystrosaurus. Ecological simulations show that by breeding younger, Lystrosaurus could have increased its chance of survival by 40% in the unpredictable environments that existed in the aftermath of the extinction.

This change in breeding behavior is not isolated to ancient animals either. In the past century, the Atlantic cod has undergone a similar effect due to human interference. Industrial fishing has removed most large individuals from the population, shifting the average size of cod significantly downward. Likewise, the remaining individuals are forced to breed as early in their lives as possible. Similar shifts have also been demonstrated in African monitor lizards exploited by humans. 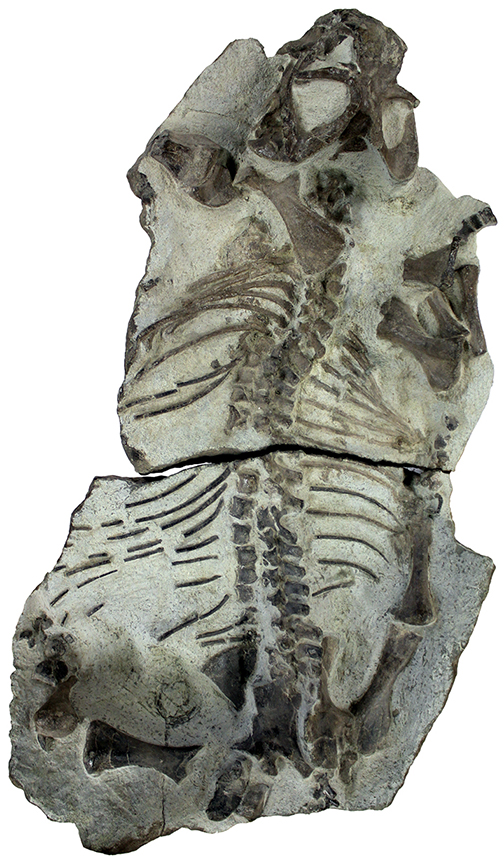 “Although it’s hard to see the effects in our daily lives, there is substantial evidence that we are in the middle of a sixth mass extinction right now. It has been predicted that half of mammal species could become extinct by the end of the next century if present patterns continue; that’s more than 1,000 times greater than previous estimates of natural extinctions, a trend not seen since the End-Permian or End-Cretaceous extinctions,” said Huttenlocker.

“With the world currently facing its sixth mass extinction, paleontological research helps us understand the world around us today,” said Angielczyk. “By studying how animals like Lystrosaurus adapted in the face of disaster, we can better predict how looming environmental changes may affect modern species.”