I can see clearly now

U engineers develop "smart glasses" that automatically focuses on what wearer sees. 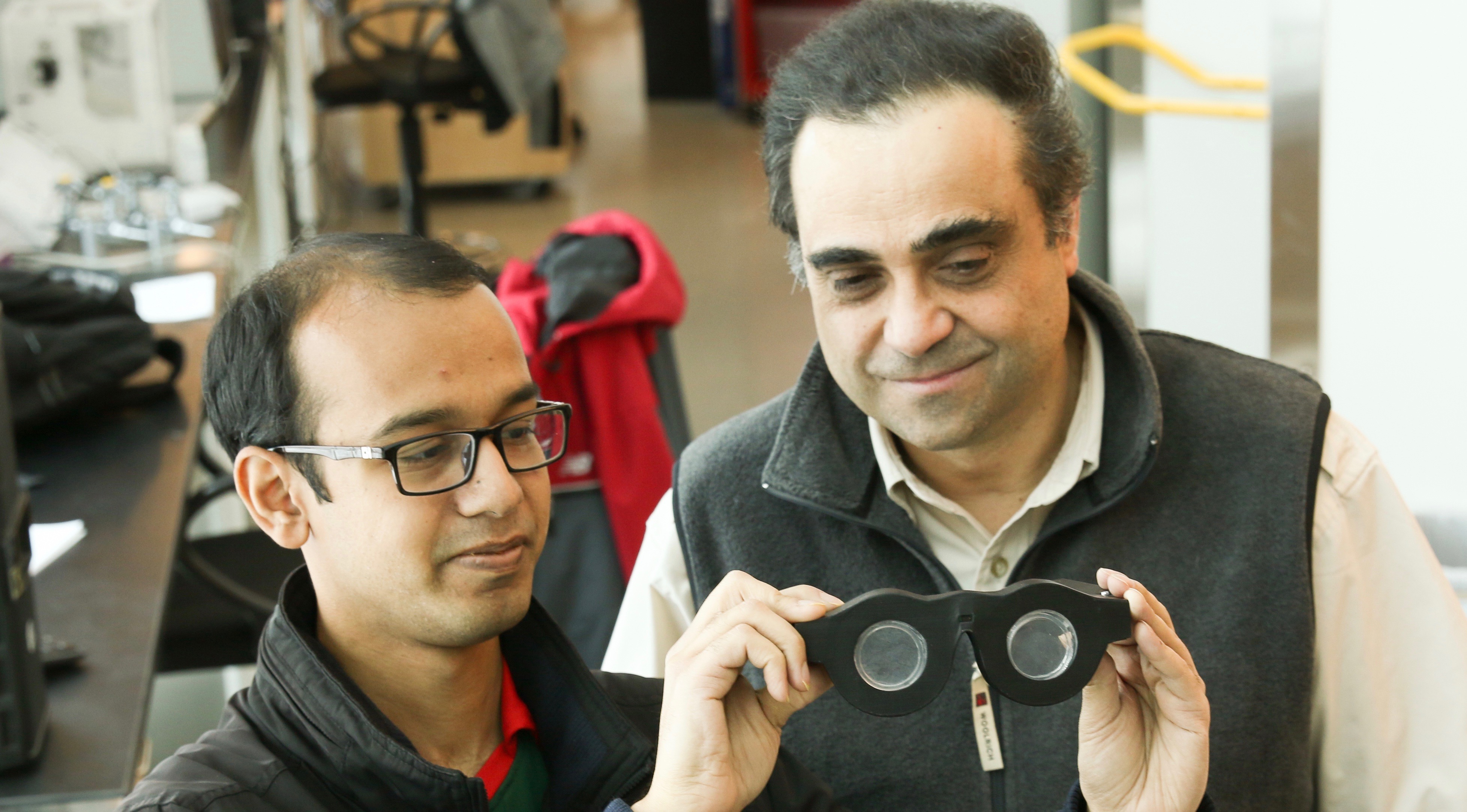 Jan. 25, 2017 – The days of wearing bifocals or constantly swapping out reading glasses might soon come to an end.

A team led by University of Utah electrical and computer engineering professor Carlos Mastrangelo and doctoral student Nazmul Hasan has created “smart glasses” with liquid-based lenses that can automatically adjust the focus on what a person is seeing, whether it is far away or close up. Research on the adaptive lenses was published this week in a special edition of the journal, Optics Express. The paper was co-authored by U electrical and computer engineering associate professor Hanseup Kim and graduate researcher Aishwaryadev Banerjee. 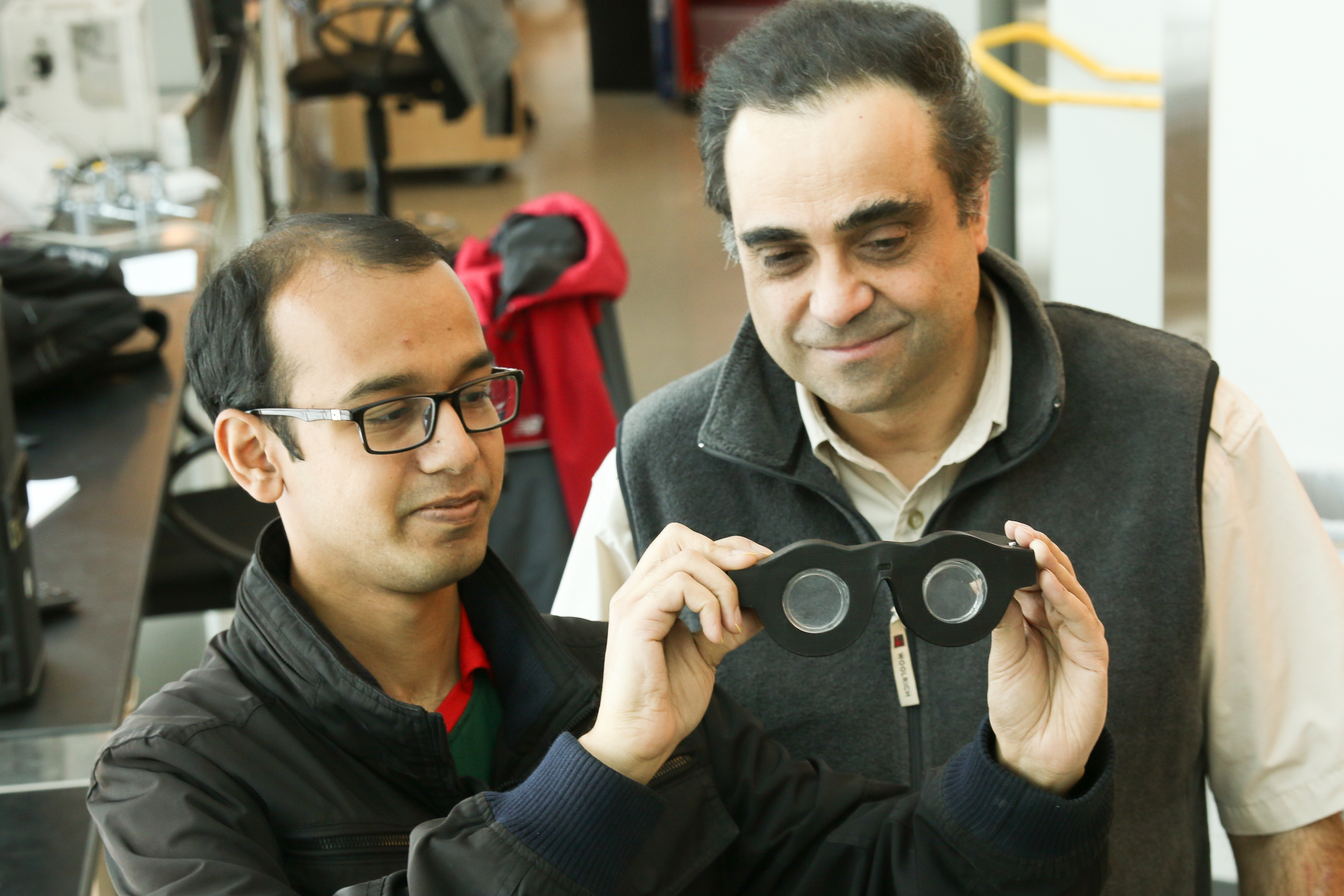 University of Utah electrical and computer engineering professor Carlos Mastrangelo, right, and doctoral student Nazmul Hasan have created “smart glasses” with liquid-based lenses that can automatically adjust the focus on what a person is seeing, whether it is far away or close up.

“Most people who get reading glasses have to put them on and take them off all the time,” says Mastrangelo, who also is a professor for USTAR, the Utah Science Technology and Research economic development initiative. “You don’t have to do that anymore. You put these on, and it’s always clear.”

The human eye has a lens inside that adjusts the focal depth depending on what you look at. But as people age, the lens loses its ability to change focus, which is why many people ultimately require reading glasses or bifocals to see objects up close and regular eyeglasses to see far away, also known as farsightedness and nearsightedness, respectively.

So Mastrangelo and Hasan have created eyeglass lenses made of glycerin, a thick colorless liquid enclosed by flexible rubber-like membranes in the front and back. The rear membrane in each lens is connected to a series of three mechanical actuators that push the membrane back and forth like a transparent piston, changing the curvature of the liquid lens and therefore the focal length between the lens and the eye.

“The focal length of the glasses depends on the shape of the lens, so to change the optical power we actually have to change the membrane shape,” Mastrangelo says. 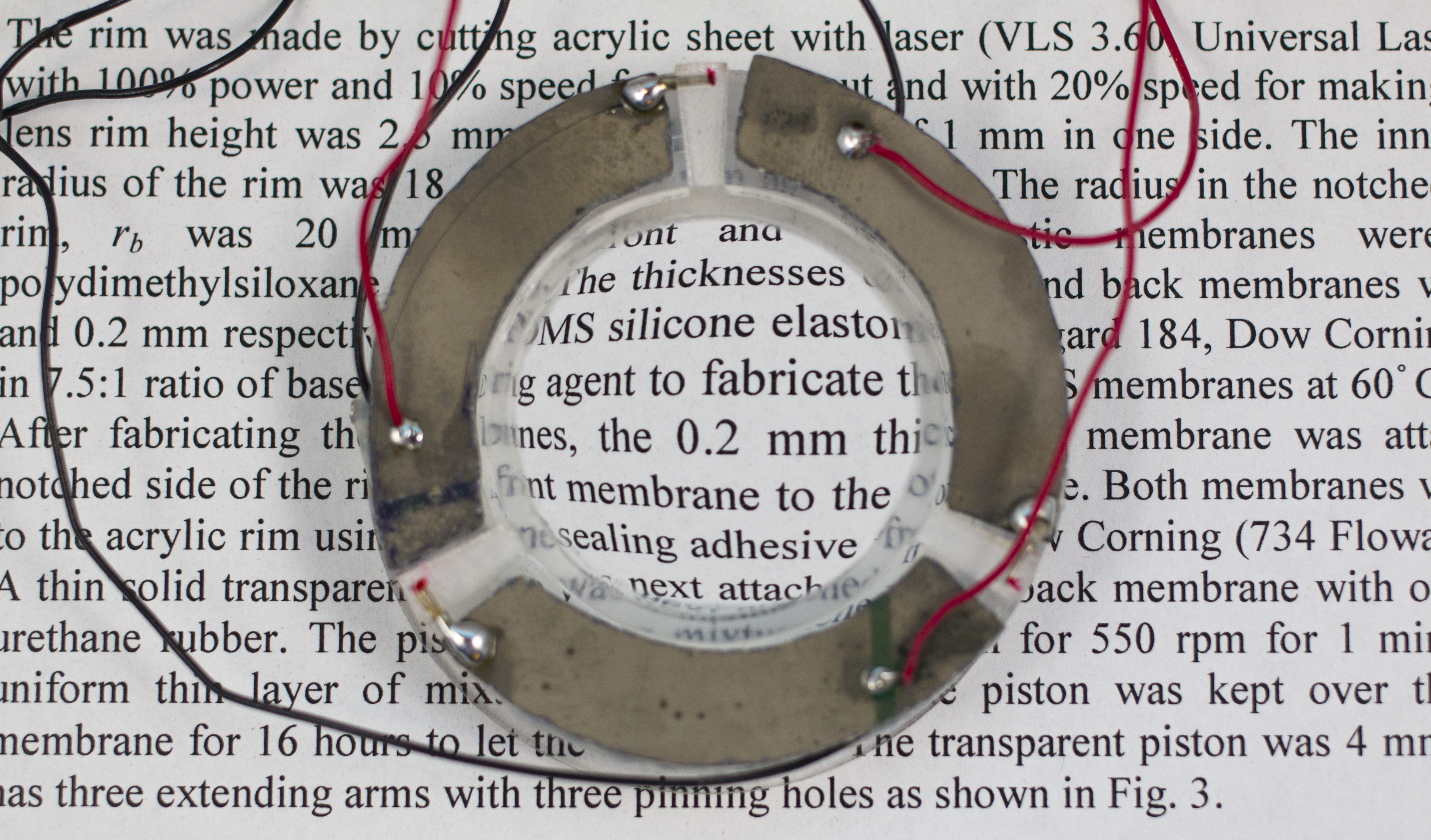 Closeup of a liquid-based lenses that can automatically adjust the focus on what a person is seeing.

The lenses are placed in special eyeglass frames also invented by Mastrangelo, Hasan and other members of the research group with electronics and a battery to control and power the actuators. In the bridge of the glasses is a distance meter that measures the distance from the glasses to an object via pulses of infrared light. When the wearer looks at an object, the meter instantly measures the distance and tells the actuators how to curve the lenses. If the user then sees another object that’s closer, the distance meter readjusts and tells the actuators to reshape the lens for farsightedness. Hasan says the lenses can change focus from one object to another in 14 milliseconds. A rechargeable battery in the frames could last more than 24 hours per charge, Mastrangelo says. 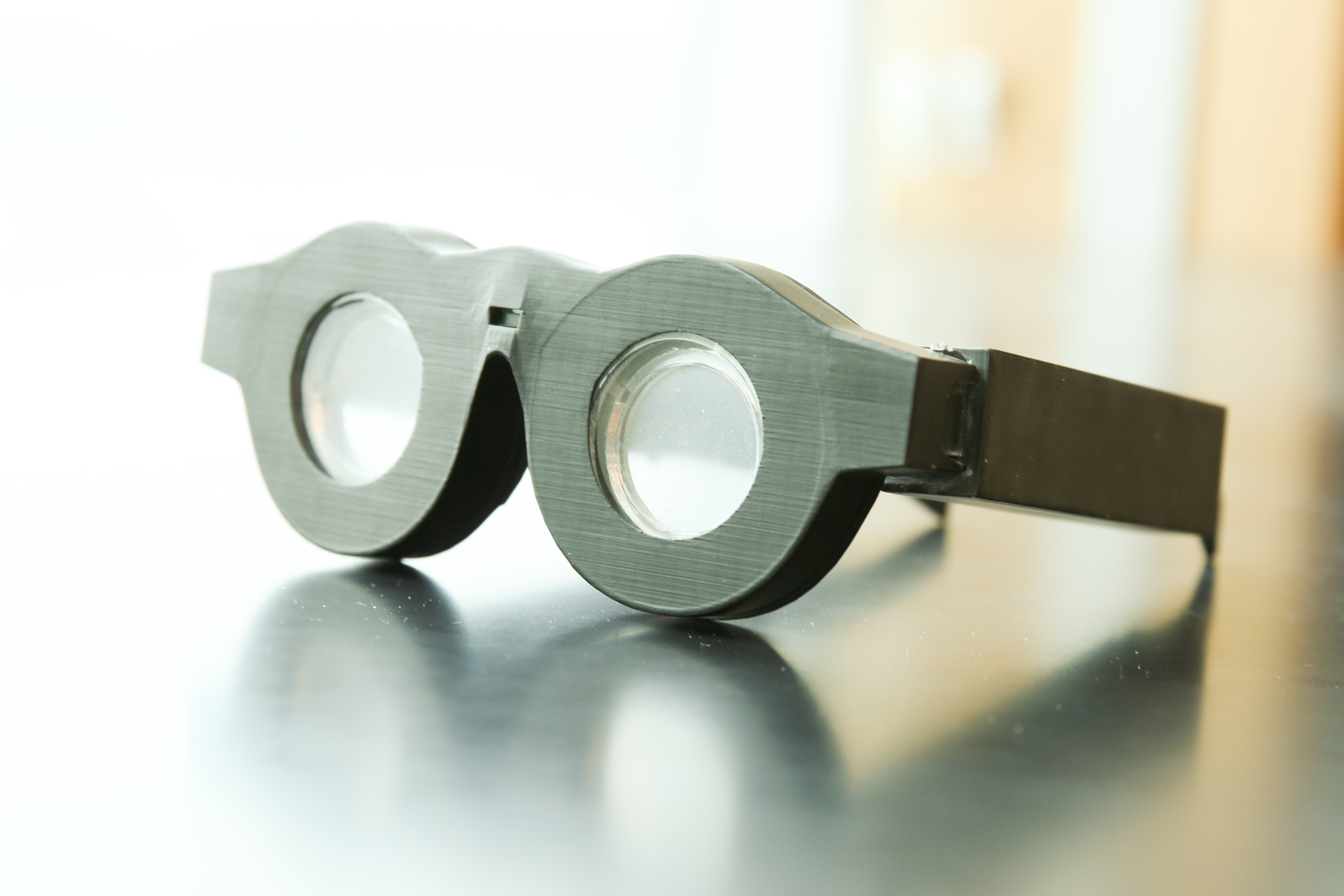 Early prototype of “smart glasses.” The lenses are placed in battery-powered frames that can automatically adjust the focal length of the lenses based on what the wearer is looking at. Researchers expect to have smaller, lighter frames with the technology in as early as three years.

Before putting them on for the first time, all users have to do is input their eyeglasses prescription into an accompanying smartphone app, which then calibrates the lenses automatically via a Bluetooth connection. Users only needs to do that once except for when their prescription changes over time, and theoretically, eyeglass wearers will never have to buy another pair again since these glasses would constantly adjust to their eyesight.

Currently, the team has constructed a bulky working prototype that they put on display at last month’s Consumer Electronics Show in Las Vegas, but expect to constantly improve the design to make them smaller and lighter. Mastrangelo said a lighter, more attractive pair could hit the marketplace in as early as three years and that a startup company, Sharpeyes LLC, has been created to commercialize the glasses.