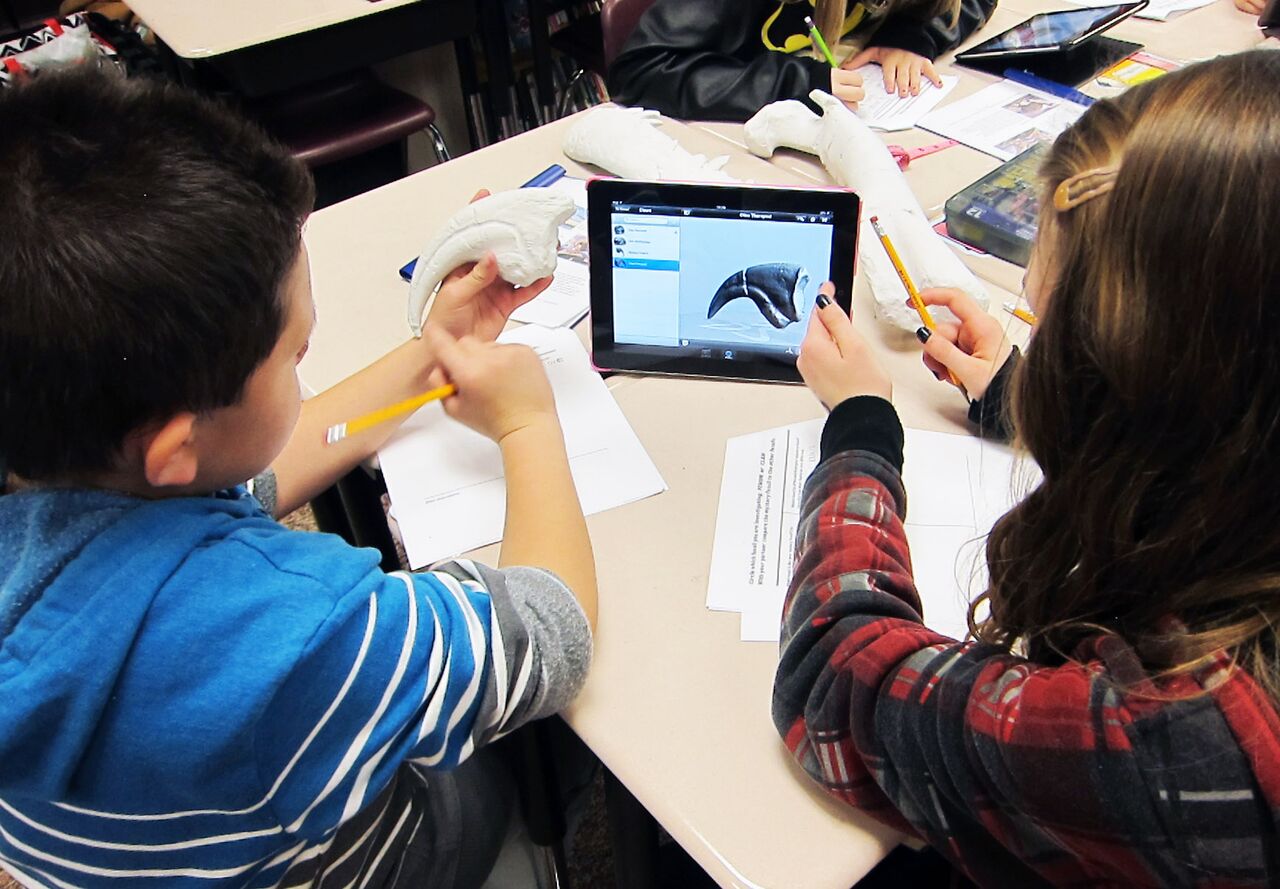 Two students examine a virtual 3-D model of a dinosaur bone from the museum’s fossil collections.

This month the Natural History Museum of Utah at the University of Utah will launch a new digital program called Research Quest that will give middle school students across the state of Utah the chance to explore some of the museum’s paleontology collections through in-depth, classroom-based investigations. After two years of prototyping the program with 250 students across seven of Utah’s Title I schools, museum researchers have found the program to be effective in increasing students’ critical thinking skills.

Research Quests is funded by the Joseph and Evelyn Rosenblatt Charitable Fund through an initiative called Advancing Critical Thinking, which strives to develop an innovative approach to enhance critical thinking skills in young people. The I.J. and Jeanné Wagner Foundation, the Utah State Legislature and the Utah Division of Workforce Services also support the project.

Working closely alongside the U’s Instructional Design and Education Technology program and the U’s Entertainment Arts and Engineering program, the museum delved into its extensive paleontology collection for the focus of its first Research Quest. In the future, the museum hopes to develop additional Research Quest programs. Each Research Quest will include online investigations for teachers to implement in their classrooms. 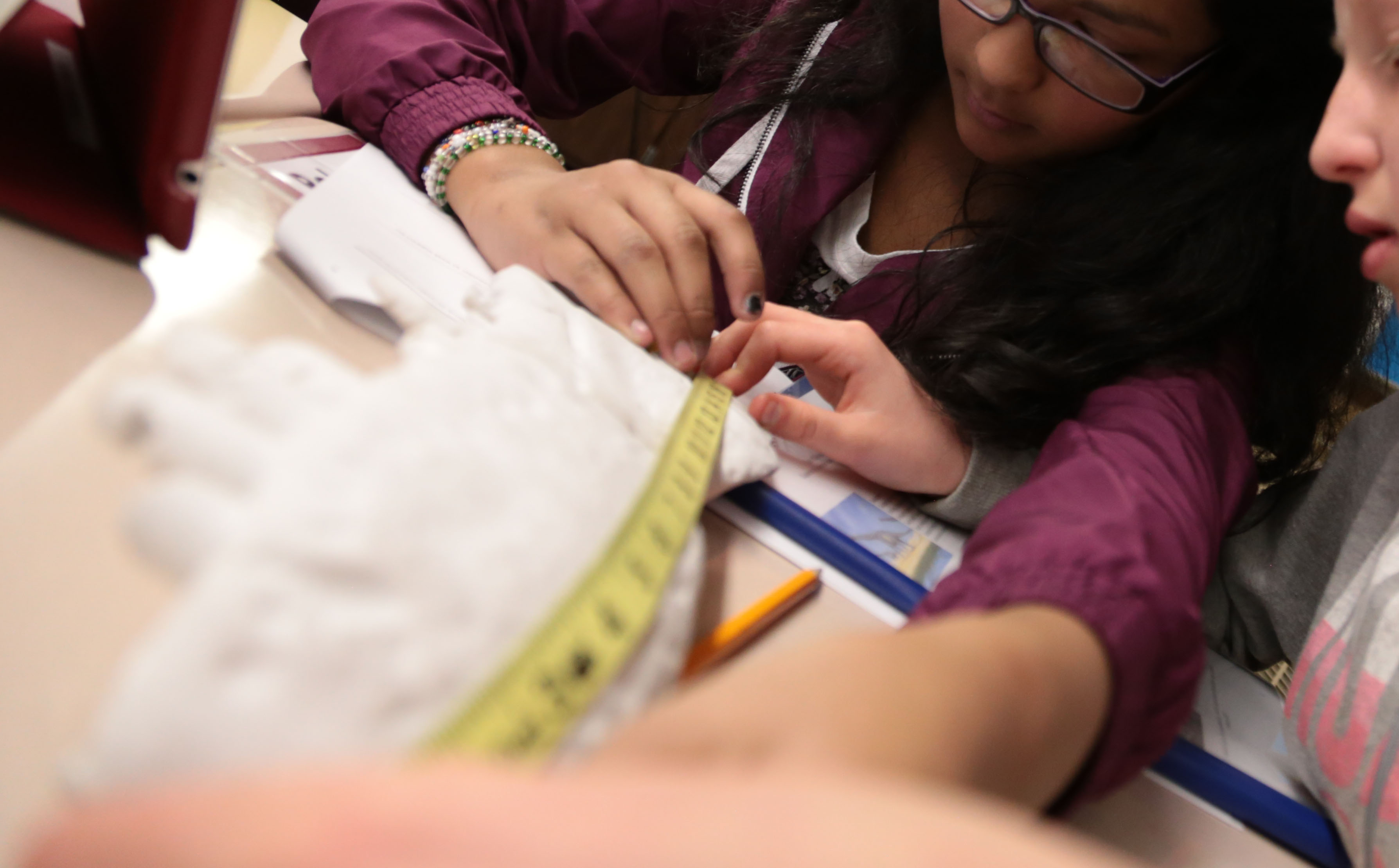 “The first question our museum team asked ourselves was, ‘How can we leverage digital learning technologies and the museum’s strengths in a way that’s both measurable and scalable?’” said Madlyn Runburg, the museum’s director of education initiatives.

“We agreed that our greatest successes through face-to-face programming have been through the use of our extensive collections and research. We have such a wide variety of collections across so many scientific fields of study that are both relevant and deeply interesting to students and teachers alike. The next question, then, was which collection to focus on for the first Research Quest and how to share it with the broadest possible audience. The paleontology collection was an easy choice since dinosaurs are a perennial favorite with students of all ages.” 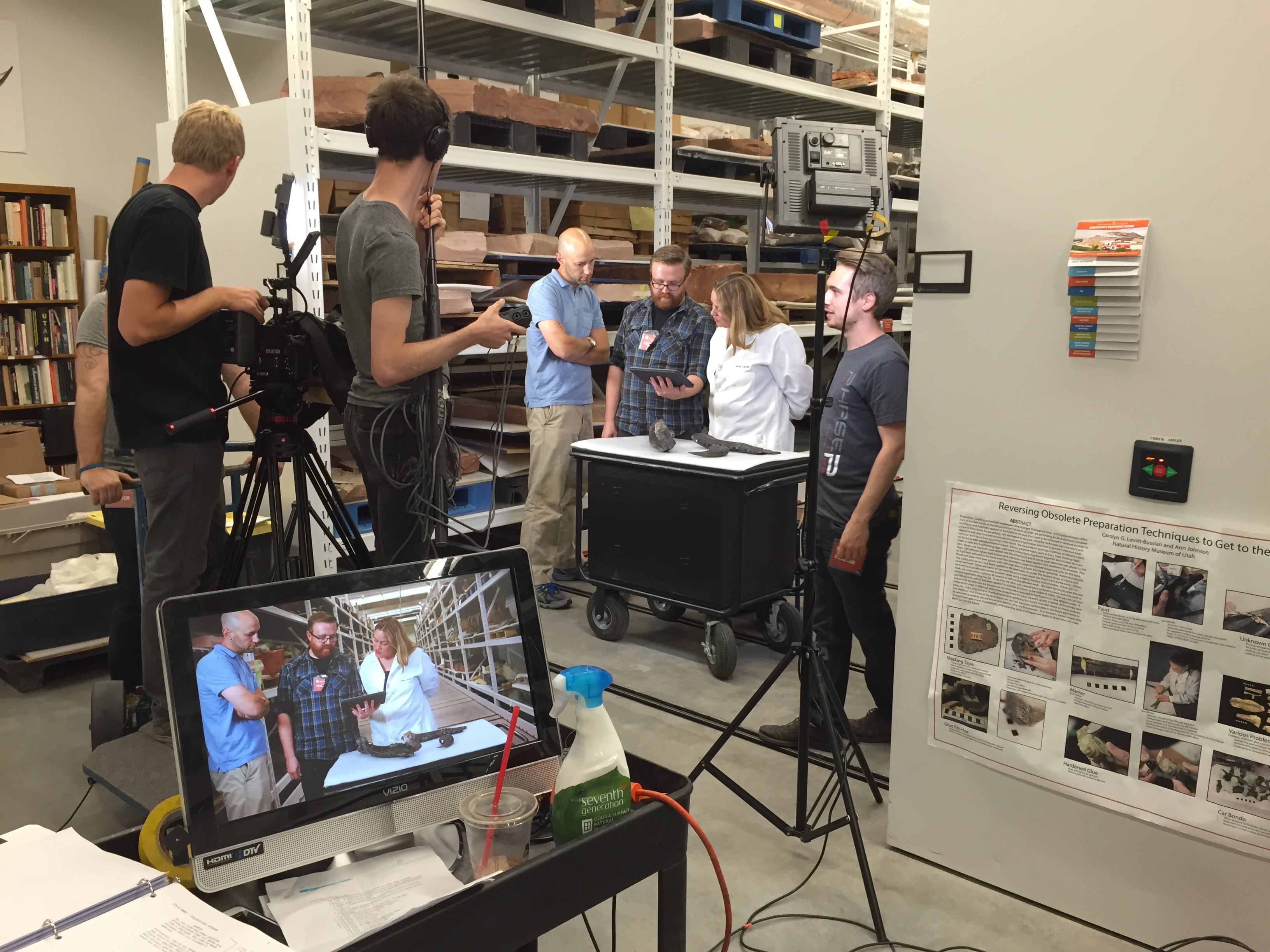 Natural History Museum of Utah paleontologist Carrie Levitt being filmed for a Research Quests video. In each video, Carrie guides students through a series of investigations.

The first Research Quest focuses on the mystery of the Cleveland Lloyd Dinosaur Quarry, where dinosaurs died 150 million years ago and left the densest concentration of Jurassic dinosaur bones ever found—the majority of which are carnivorous dinosaurs.

In each of the three investigations, videos of museum paleontologist Carrie Levitt introduce and guide students through the research questions being investigated at Cleveland Lloyd Dinosaur Quarry. Students are encouraged to study primary resources like virtual 3-D models of the museum’s fossil collections, which can be viewed and manipulated on computers and tablets.

In a third investigation, students design dinosaurs using a simulation-based game, Dino Lab, created by the U’s Entertainment, Arts and Engineering program. In this game, students use 3-D models of fossils to build dinosaurs that can survive a four-stage challenge as a means to understand how features and adaptations impact survival in a mock Jurassic environment.

Critical skills for the future 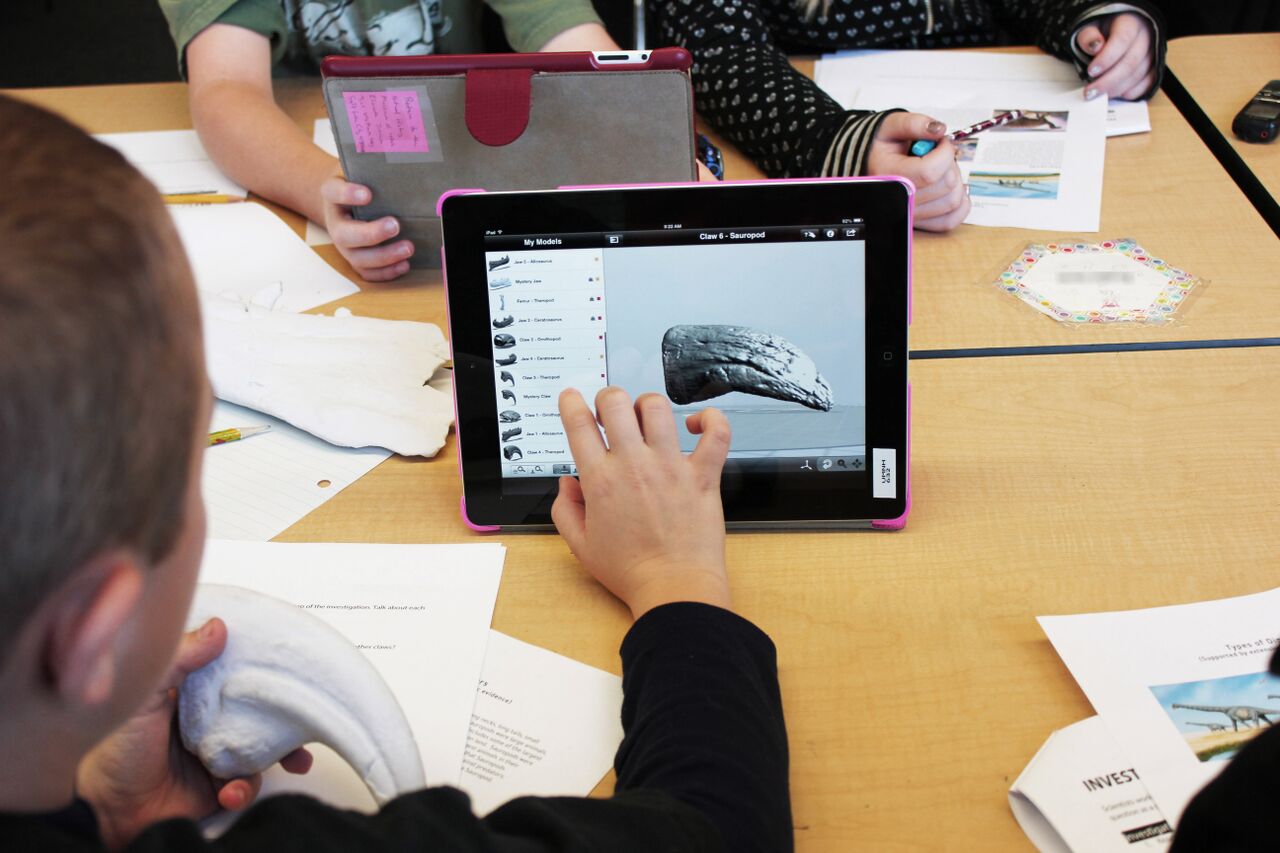 A student manipulates a virtual 3-D model of a bone.

Each of the Research Quest activities was carefully crafted to challenge students to think critically. Rather than emphasizing rote memorization, the hands-on activities encourage students to listen to classmates, make and question their own observations, identify and analyze evidence, and construct strong evidenced-based arguments to the research questions that make up Research Quest.

Over the past two years, the museum has tested the first Research Quest in seven Title I schools: four in Davis County, two in Nebo County and one in Salt Lake County, totaling roughly 250 sixth graders. Researchers specifically chose Title I schools to ensure that Research Quests would be broadly accessible.

After the spring implementation of Research Quest in two rural schools researchers found the same results.

“Through our testing, observations and interviewing of students, we’ve found that Research Quest was effective in improving students’ critical thinking skills. Furthermore, students not only improved their critical thinking skills, but they also understood what skills they’re gaining and, we predict, can transfer them to other learning experiences,” said Runburg. 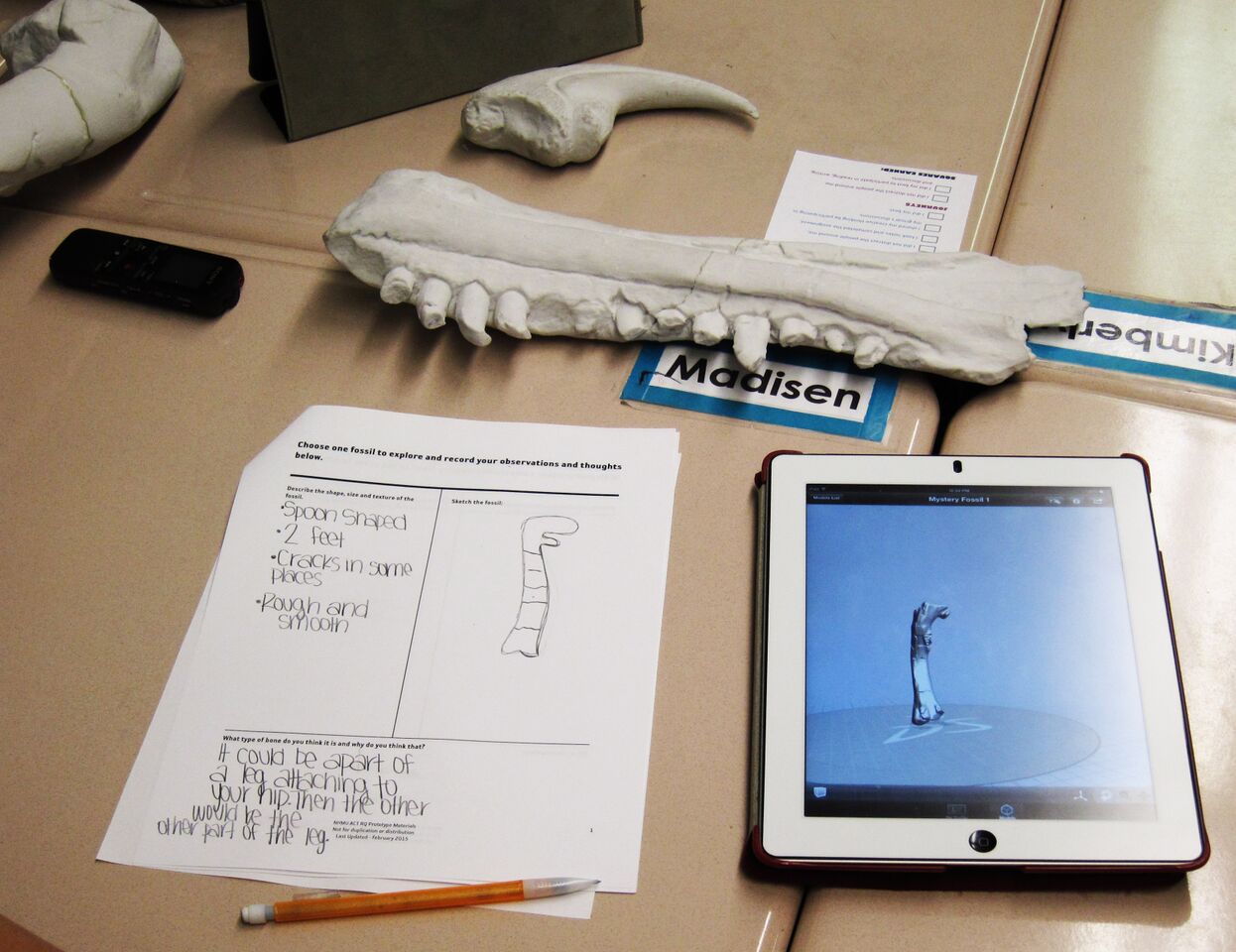 A completed Research Quest activity worksheet next to a virtual 3-D model of a dinosaur bone from the Natural Museum of Utah’s fossil collections.

Feedback from teachers has also been positive. Teachers recognize a strong alignment between Research Quest and the Utah Core Standards’ English Language Arts and science curriculums. The program offers teachers flexibility to use some or all of the investigations, provides curriculum-aligned resources and allows students to engage in authentic, applied learning.

“This was a great program. It was very hands-on and my students loved being able to look and touch as they learned. The best part as a teacher was watching my students participate in discussions together and problem solving together as part of this program. It was a unique learning experience that captures the attention of all my students, regardless of their learning abilities and kept them engaged throughout the course of the program. It is rare as a classroom teacher to be able to offer students this type of learning experience, so the fact that it is readily available is a valuable asset to education,” said Jodi Rees, a teacher at Vae View Elementary whose classroom helped prototype Research Quest in fall 2014. 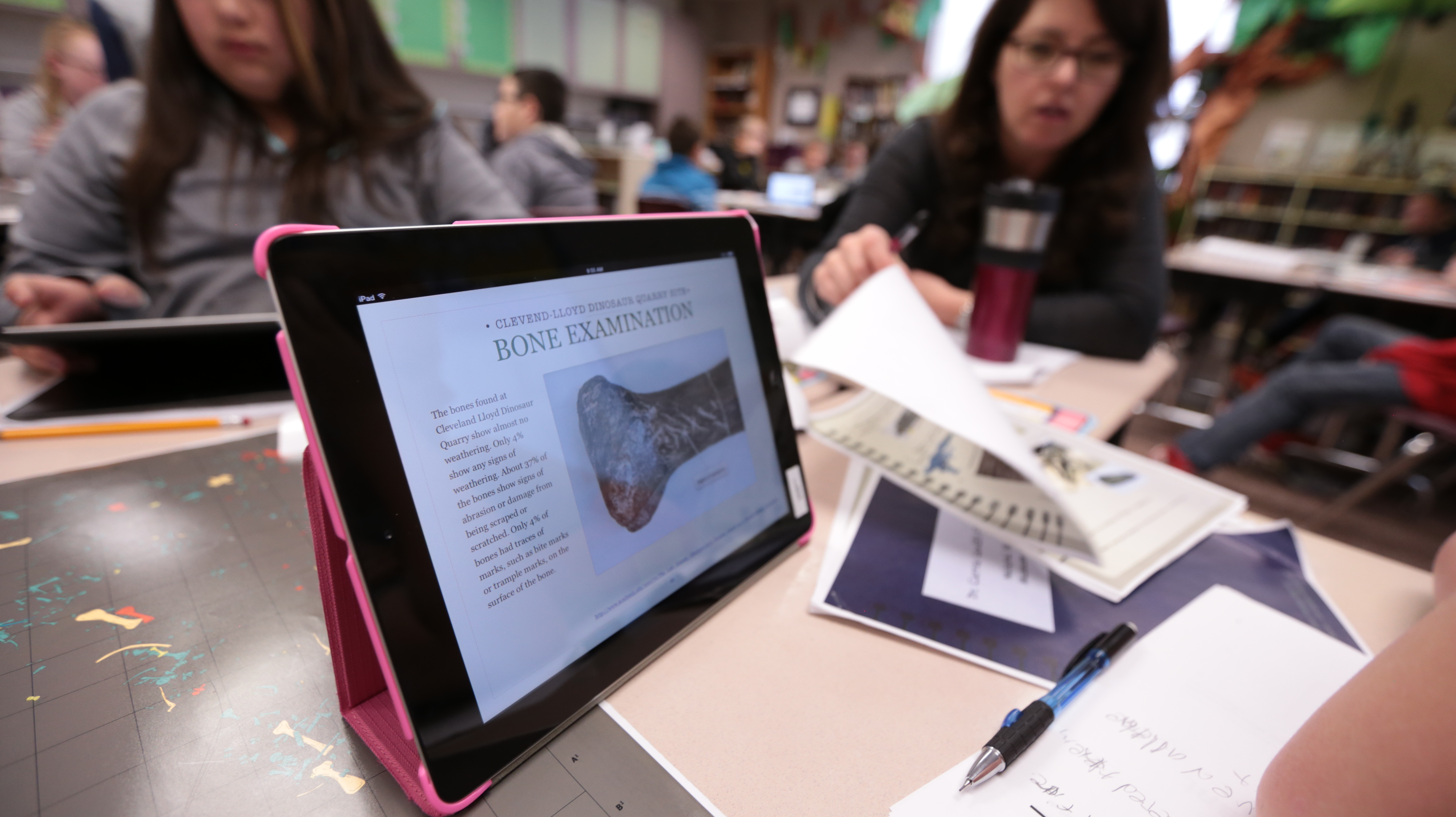 Starting in October 2015, the museum will roll Research Quest out to 100 middle school teachers across Granite, Jordan, Davis and Weber school districts. The statewide rollout will include a training component for teachers on how to implement the program in the classroom and what assessments to use for measuring critical thinking in students. In February 2016, the program will be extended to 400 more middle school teachers across the state.

The museum and the Instructional Design and Education Technology program are currently in the process of creating a rubric for teachers to evaluate program implementation, as well as a rubric for students to assess their own learning accomplishments through the program.