Distraction rated 'high' for most devices while driving 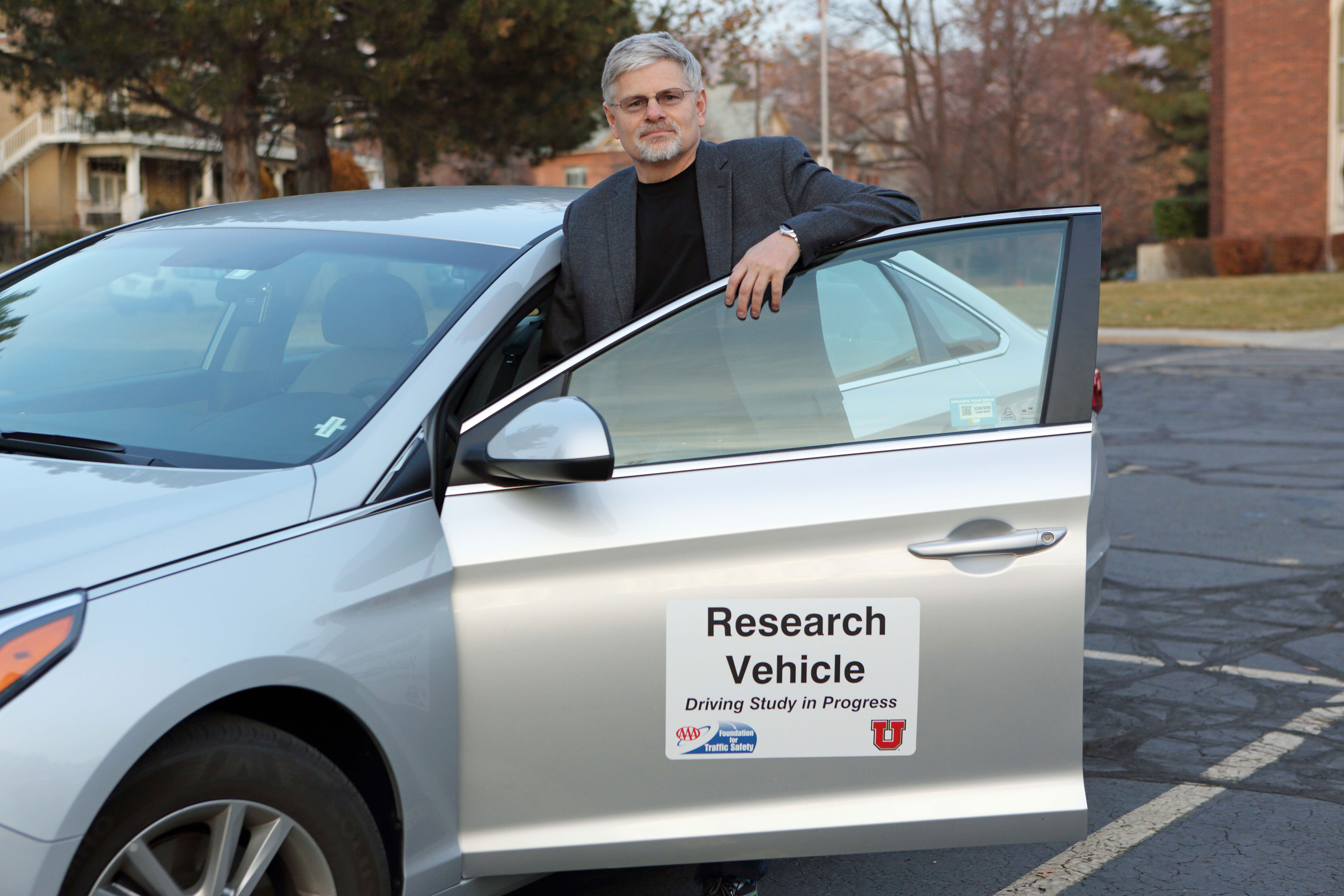 Oct. 22, 2015 – If you think it is okay to talk to your car infotainment system or smartphone while driving or even when stopped at a red light, think again. It takes up to 27 seconds to regain full attention after issuing voice commands, University of Utah researchers found in a pair of new studies for the AAA Foundation for Traffic Safety.

One of the studies showed that it is highly distracting to use hands-free voice commands to dial phone numbers, call contacts, change music and send texts with Microsoft Cortana, Apple Siri and Google Now smartphone personal assistants, though Google Now was a bit less distracting than the others.

The other study examined voice-dialing, voice-contact calling and music selection using in-vehicle information or “infotainment” systems in 10 model-year 2015 vehicles. Three were rated as moderately distracting, six as highly distracting and the system in the 2015 Mazda 6 as very highly distracting.

“Just because these systems are in the car doesn’t mean it’s a good idea to use them while you are driving,” says University of Utah psychology professor David Strayer, senior author of the two new studies. “They are very distracting, very error prone and very frustrating to use. Far too many people are dying because of distraction on the roadway, and putting another source of distraction at the fingertips of drivers is not a good idea. It’s better not to use them when you are driving.”

The research also found that, contrary to what some may believe, practice with voice-recognition systems doesn’t eliminate distraction. The studies also showed older drivers – those most likely to buy autos with infotainment systems – are much more distracted than younger drivers when giving voice commands. 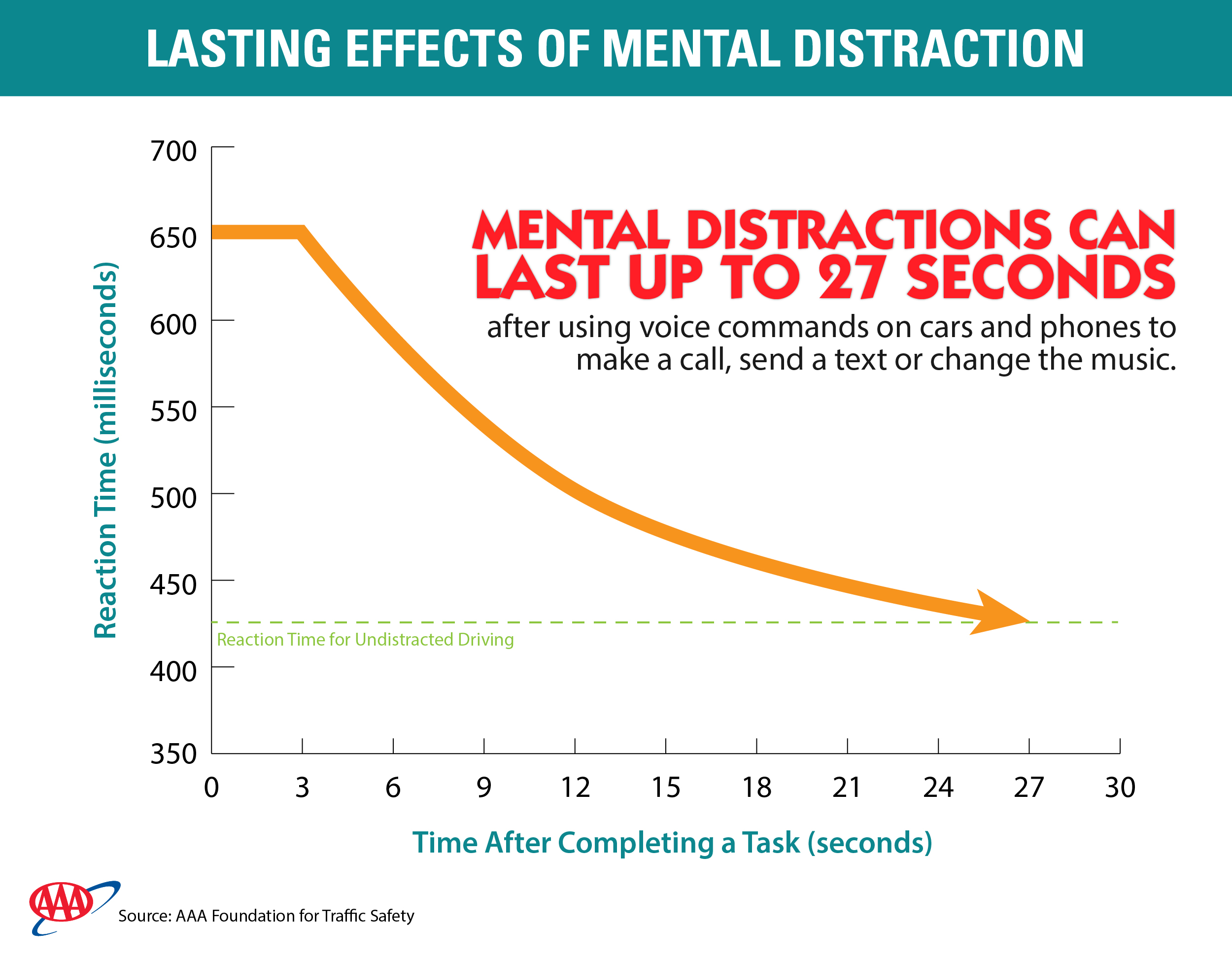 The graphic illustrates a key finding of a pair of new University of Utah studies on driver distraction from using voice-commands while driving to make a call, change music or send a text while driving using voice-commands to smartphone personal assistants and in-vehicle information systems: It takes up to 27 seconds to regain full attention to the road after disconnecting.

The 27 seconds means a driver traveling 25 mph would cover the length of three football fields before regaining full attention.

“Most people think, ‘I hang up and I’m good to go,’” Strayer says. “But that’s just not the case. We see it takes a surprisingly long time to come back to full attention. Even sending a short text message can cause almost another 30 seconds of impaired attention.”

“The voice-command technology isn’t ready,” says Joel Cooper, a University of Utah research assistant professor of psychology and a co-author of the new studies. “It’s in the cars and is billed as a safe alternative to manual interactions with your car, but the voice systems simply don’t work well enough.”

“Many of these systems have been put into cars with a voice-recognition system to control entertainment: Facebook, Twitter, Instagram, Snapchat, Facetime, etc. We now are trying to entertain the driver rather than keep the driver’s attention on the road.”

In 2013, 3,154 people died and 424,000 others were injured in motor vehicle crashes on U.S. roads involving driver distraction, says the U.S. Department of Transportation.

The new AAA reports urge that voice activated, in-vehicle information systems “ought not to be used indiscriminately” while driving, and advise that “caution is warranted” in smart-phone use while driving. 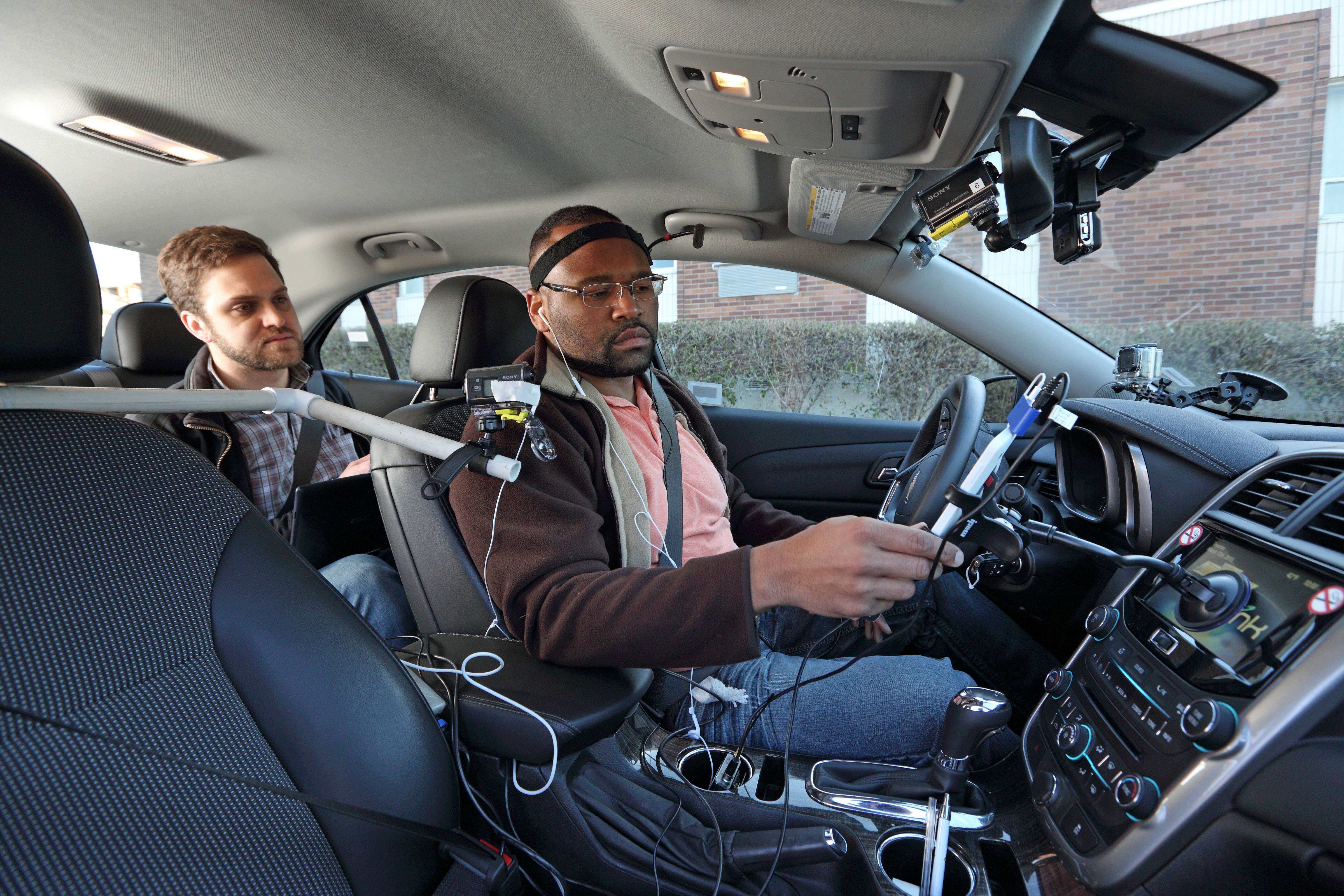 The studies are fifth and sixth since 2013 by University of Utah psychologists and funded by the AAA Foundation for Traffic Safety. AAA formerly was known as the American Automobile Association.  Strayer and Cooper ran the studies with Utah psychology doctoral students Joanna Turrill, James Coleman and Rachel Hopman.

The ratings: In-car systems and smartphone assistants are distracting

One of the new studies found mild distraction for in-vehicle information systems in the Chevy Equinox with MyLink (2.4), Buick Lacrosse with IntelliLink (2.4) and Toyota 4Runner with Entune (2.9). 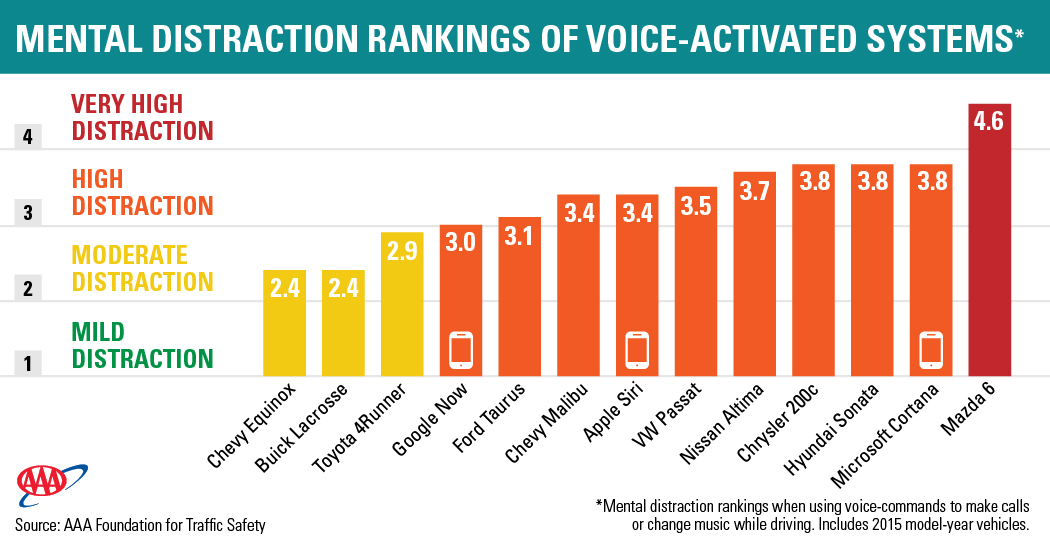 In some cases, the same voice-command system (like Chevy MyLink) got different distraction scores in different models – something the researchers speculate is due to varying amounts of road noise and use of different in-vehicle microphones.

The second new study found all three major smartphone personal assistants either highly or very highly distracting. Two scores were given to each voice-based system: A lower number for using voice commands only to make calls or change music when driving – the same tasks done with the in-car systems – and a higher number that also included using smartphones to send texts by voice commands.

Strayer says of both in-car information systems and smartphone personal assistants: “These systems are often very difficult to use, especially if you’re just trying to entertain yourself. … The vast majority of people we tested ended up being frustrated by the complexity and error-prone nature of the systems.”

How the studies were conducted

With researchers in the car, the drivers were tested for the extent of their distraction, even as they kept their eyes on the road and hands on the wheel after hitting a voice-command system button. A head-mounted LED light flashed red every three to five seconds at the edge of a driver’s left eye. Drivers pressed a switch attached to a thumb when they saw the light. The researchers measured how voice interactions with a car or smartphone reduced drivers’ reaction times and accuracy at seeing the flashing lights. The drivers also completed surveys about their perceived level of distraction, and videos measured how much of the time they kept their eyes on the road, mirrors or dashboard. 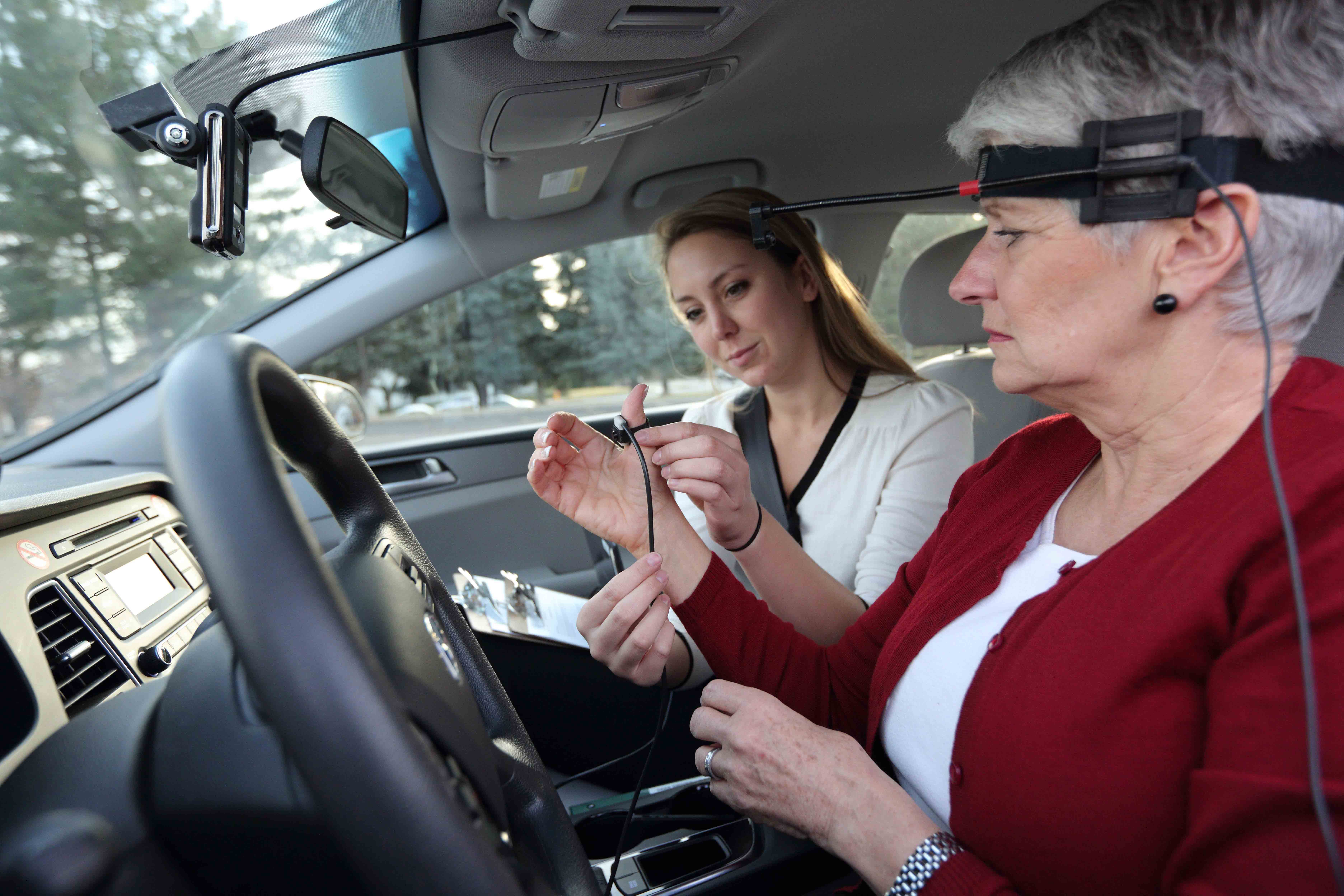 The in-vehicle information system study included 257 people and the smartphone personal assistant study had 65 participants, all with no at-fault accidents during the past five years. Unlike the 2013 and 2014 studies, which included primarily people in their 20s, subjects in the new studies ranged in age from 21 to 70.

In the in-car information system study, the researchers did an initial test on the subjects, then let them take the cars home for five days to practice using the systems. Then they returned for reassessment of the mental workload from using the systems.

“If you are going to use these systems, use them to support the primary task of driving – like for navigation or to change the radio or temperature – and keep the interaction short.”

On behalf of the AAA Foundation for Traffic Safety, University of Utah psychology professor David Strayer has conducted new research into the effects of mental distractions on a person’s ability to drive safely. In two new studies, Strayer and colleagues found that giving voice commands to almost all smartphone personal assistants and in-vehicle infotainment systems is highly distracting, and that it takes drivers up to 27 seconds to regain full attention after using the devices.

WASHINGTON, D.C. (Oct. 22, 2015) – Potentially unsafe mental distractions can persist for as long as 27 seconds after dialing, changing music or sending a text using voice commands, according to surprising new research by the AAA Foundation for Traffic Safety. The results raise new and unexpected concerns regarding the use of phones and vehicle information systems while driving. This research represents the third phase of the Foundation’s comprehensive investigation into cognitive distraction, which shows that new hands-free technologies can mentally distract drivers even if their eyes are on the road and their hands are on the wheel.

“The lasting effects of mental distraction pose a hidden and pervasive danger that would likely come as a surprise to most drivers,” said Peter Kissinger, President and CEO of the AAA Foundation for Traffic Safety. “The results indicate that motorists could miss stop signs, pedestrians and other vehicles while the mind is readjusting to the task of driving.”

Researchers found that potentially unsafe levels of mental distraction can last for as long as 27 seconds after completing a distracting task in the worst-performing systems studied. At the 25 MPH speed limit in the study, drivers traveled the length of nearly three football fields during this time. When using the least distracting systems, drivers remained impaired for more than 15 seconds after completing a task.

“Drivers should use caution while using voice-activated systems, even at seemingly safe moments when there is a lull in traffic or the car is stopped at an intersection,” said Marshall Doney, AAA’s President and CEO. “The reality is that mental distractions persist and can affect driver attention even after the light turns green.”

The researchers discovered the residual effects of mental distraction while comparing new hands-free technologies in ten 2015 vehicles and three types of smartphones. The analysis found that all systems studied increased mental distraction to potentially unsafe levels. The systems that performed best generally had fewer errors, required less time on task and were relatively easy to use.

“The massive increase in voice-activated technologies in cars and phones represents a growing safety problem for drivers,” continued Doney. “We are concerned that these new systems may invite driver distraction, even as overwhelming scientific evidence concludes that hands-free is not risk free.”

Previous AAA Foundation research established that a category 1 mental distraction is about the same as listening to the radio or an audio book. A category 2 distraction is about the same as talking on the phone, while category 3 is equivalent to sending voice-activated texts on a perfect, error-free system. Category 4 is similar to updating social media while driving, while category 5 corresponds to a highly-challenging, scientific test designed to overload a driver’s attention.

Over the last two weeks, AAA has used the findings to continue our collaborative work with policymakers, safety advocates and manufacturers to improve the safety of future technology.

“Developers should reduce mental distractions by designing systems that are no more demanding than listening to the radio or an audiobook,” continued Doney. “Given that the impairing effects of distraction may last much longer than people realize, AAA advises consumers to use caution when interacting with these technologies while behind the wheel.”

Dr. David Strayer and Dr. Joel Cooper of the University of Utah conducted the research. A total of 257 drivers ages 21-70 participated in the study of 2015 model-year vehicles, while 65 additional drivers ages 21-68 tested the three phone systems.

Established by AAA in 1947, the AAA Foundation for Traffic Safety is a 501(c)(3) not-for-profit, publicly-supported charitable educational and research organization. Dedicated to saving lives and reducing injuries on our roads, the Foundation’s mission is to prevent crashes and save lives through research and education about traffic safety. The Foundation has funded over 200 research projects designed to discover the causes of traffic crashes, prevent them and minimize injuries when they do occur. Visit www.AAAFoundation.org for more information on this and other research.

As North America’s largest motoring and leisure travel organization, AAA provides more than 55 million members with travel, insurance, financial and automotive-related services. Since its founding in 1902, the not-for-profit, fully tax-paying AAA has been a leader and advocate for the safety and security of all travelers. AAA clubs can be visited on the Internet at AAA.com.

Links to B-roll video, other information and the two studies

AAA B-roll video about the University of Utah research is here: https://vimeo.com/aaapublicaffairs/review/141697388/791daa0c75

After the embargo expires, AAA news releases, high-resolution images, broadcast-quality video, fact sheets and podcasts will be available on the AAA NewsRoom at NewsRoom.AAA.com

PDFs of the two studies may be downloaded here: