Protease might become a friend instead of foe in fighting HIV

Now, University of Utah researchers found a way to turn protease into a double-edged sword: They showed that if they delay the budding of new HIV particles, protease itself will destroy the virus instead of helping it spread. They say that might lead, in about a decade, to new kinds of AIDS drugs with fewer side effects.

“We could use the power of the protease itself to destroy the virus,” says virologist Saveez Saffarian, an associate professor of physics and astronomy at the University of Utah and senior author of the study released today by PLOS Pathogens, an online journal published by the Public Library of Science.

So-called cocktails or mixtures of protease inhibitors emerged in the 1990s and turned acquired immune deficiency syndrome into a chronic, manageable disease for people who can afford the medicines. But side effects include fat redistribution in the body, diarrhea, nausea, rash, stomach pain, liver toxicity, headache, diabetes and fever.

“They have secondary effects that hurt patients,” says Mourad Bendjennat, a research assistant professor of physics and astronomy and the study’s first author. “And the virus becomes resistant to the inhibitors. That’s why they use cocktails.” 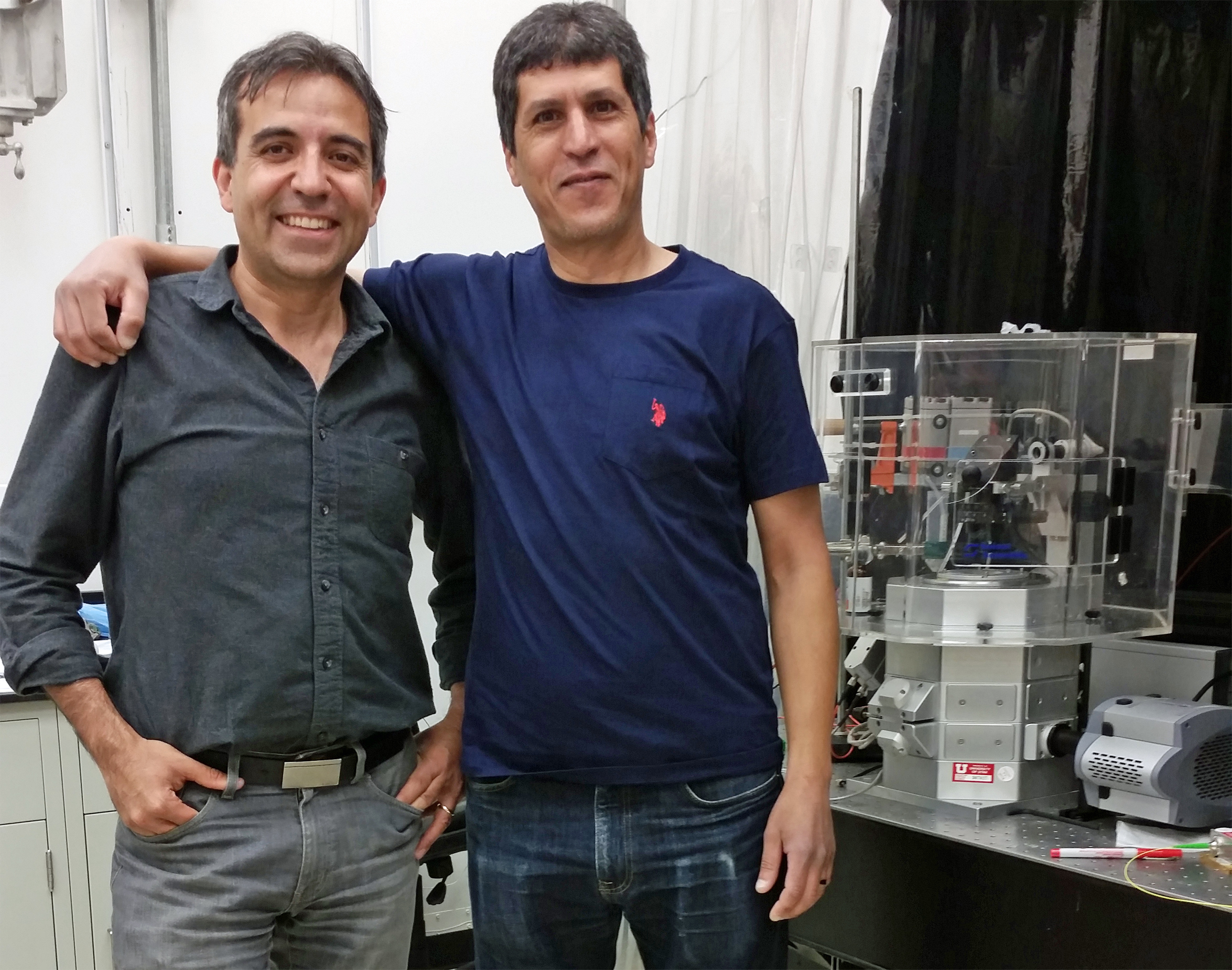 University of Utah researchers Saveez Saffarian and Mourad Bendjennat conducted a study suggesting a possible future approach to fighting AIDS. Current drugs inhibit a protein named protease to prevent HIV from replicating and infecting news cells. In laboratory experiments, the Utah scientists found a way to use protease itself to destroy the virus instead of helping it spread.

Bendjennat adds that by discovering the molecular mechanism in which protease interacts with HIV, “we are developing a new approach that we believe may be very efficient in treating the spread of HIV.”

However, he and Saffarian emphasize the research is basic, and that it will be a decade before more research might develop the approach into news AIDS treatments.

Figuring out the role of protease in HIV budding

Inside a cell infected by HIV, new virus particles are constructed largely with a protein named Gag. Protease enzymes are incorporated into new viral particles as they are built, and are thought to be activated after the new particles “bud” out of infected cell and then break off from it.

The particles start to bud from the host cell in a saclike container called a vesicle, the neck of which eventually separates from the outer membrane of the infected cell. “Once the particles are released, the proteases are activated and the particles transform into mature HIV, which is infectious,” Saffarian says.

“There is an internal mechanism that dictates activation of the protease, which is not well understood,” he adds. “We found that if we slow the budding process, the protease activates while the HIV particle is still connected to the outer membrane of host [infected] cell. As a result, it chews out all the proteins inside the budding HIV particle, and those essential enzymes and proteins leak back into the host cell. The particle continues to bud out and release from the cell, but it is not infectious anymore because it doesn’t have the enzymes it needs to mature.”

The scientists found they could slow HIV particles from budding out of cells by interfering with how they interact with proteins named ESCRTs (pronounced “escorts”), or “endosomal sorting complexes required for transport.”

This illustration shows how the AIDS-causing virus normally buds and releases from an infected cell (upper right to middle left) and how a new approach to fighting the virus could render release virus particles noninfectious (upper right, curing back to the left). The blue band in the illustration represents the surface of an infected cell. The process begins at the upper right as a new HIV particle begins to emerge or bud from an infected cell (first two light blue partial spheres), with viral envelope proteins protruding from the emerging virus particle. The budded particle is shown at the center, now with a cutaway view of the inside of the HIV, which includes Gag proteins (yellowish orange) and Pol proteins (blue), which include enzymes needed for the virus to replicate. At this point the virus is still attached to the cell. The last two HIV particles on the left represent the normal budding process, in which the HIV particle or “viron” is released from the cell, with an orange capsid protein inside the virus carrying the enzymes that make it infectious. University of Utah scientists have found that if they can delay the budding process – represented by the three HIV particles extending from the center to the middle right – they can render it noninfectious. In that case, the delay allows the enzymes inside the HIV particle to leak back into the host cell, so that when the virus finally is released, it lacks the enzymes in the capsid protein that makes it infectious.

ESCRTs are involved in helping pinch off budding HIV particles – essentially cutting them from the infected host cell.

Saffarian says scientific dogma long has held “that messing up the interactions of the virus with ESCRTs results in budding HIV particles permanently getting stuck on the host cell membrane instead of releasing.” Bendjennat says several studies in recent years indicated that the particles do get released, casting some doubt on the long held dogma.

“We found HIV still releases even when early ESCRT interactions are intentionally compromised, however, with a delay,” Saffarian says. “They are stuck for a while and then they release. And by being stuck for a while, they lose their internal enzymes due to early protease activation and lose their infectivity.”

Bendjennat says by delaying virus budding and speeding “when the protease gets activated, we are now capable of using it to make new released viruses noninfectious”

How the research was done

The experiments used human skin cells grown in tissue culture. It already was known that new HIV particles assemble the same way whether the infected host cell is a skin cell, certain other cells or the T-cell white blood cell infected by the virus to cause AIDS. The experiments involved both live HIV and so-called viruslike particles.

Bendjennat and Saffarian genetically engineered mutant Gag proteins. A single HIV particle is made of some 2,000 Gag proteins and 120 copies of proteins known as Gag-Pol, as well as genetic information in the form of RNA. Pol includes protease, reverse transcriptase and integrase – the proteins HIV uses to replicate.

The scientists also showed that how fast an HIV particle releases from an infected cell depends on how much enzyme cargo it carries in the form of Pol proteins. By interfering with ESCRT proteins during virus-release experiments with viruslike particles made only of Gag protein but none of the normal Pol enzymes, the 75-minute delay shrank to only 20 minutes, and the 10-hour delay shrank to only 50 minutes.

“When the cargo is large, the virus particle needs more help from the ESCRTs to release on a timely fashion,” Saffarian says.

Because HIV carries a large cargo, it depends on ESCRTs to release from an infected cell, so ESCRTs are good targets for drugs to delay release and let HIV proteases leak back into the host cell, making new HIV particles noninfectious, he says.

Bendjennat says other researchers already are looking for drugs to block ESCRT proteins in a way that would prevent the “neck” of the budding HIV particle from pinching off or closing, thus keeping it connected to the infected cell. But he says the same ESCRTs are needed for cell survival, so such drugs would be toxic.

Instead, the new study suggests the right approach is to use low-potency ESCRT-inhibiting drugs that delay HIV release instead of blocking it, rendering it noninfectious with fewer toxic side effects, he adds.

The study was funded by the National Institutes of Health. Saffarian also is funded as an investigator with USTAR, the Utah Science Technology and Research economic development initiative.