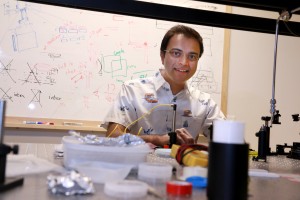 University of Utah Electrical and Computer Engineering professor Rajesh Menon has developed a new camera color filter for digital cameras that lets in three times more light than conventional filters, resulting in much cleaner, more accurate pictures taken in lowlight. The new filter can be used for any kind of digital camera, but Menon is developing it specifically for smartphone cameras.

Anyone who’s taken a picture of birthday candles being blown out or a selfie during a romantic candlelit dinner knows how disappointing it is when the photo comes out dark and grainy.

But University of Utah Electrical and Computer Engineering professor Rajesh Menon has developed a new camera color filter that lets in three times more light than conventional filters, resulting in much cleaner, more accurate pictures taken in lowlight. The new filter can be used for any kind of digital camera, but Menon is developing it specifically for smartphone cameras. Menon and doctoral student Peng Wang describe the invention today in the journal, Optica.

“Overall, camera phones are very good, but they are not very good in lowlight,” says Menon. “If you go out on a hike in the evening and take a picture of the sky you will see that it’s very grainy. Lowlight photography is not quite there and we are trying to fix that. This is the last frontier of mobile photography.”

Traditional digital cameras, whether they are point-and-shoot cameras or the now-ubiquitous smartphone cameras, use an electronic sensor that collects the light to make the picture. Over that sensor is a filter designed to allow in the three primary colors: red, blue and green. But by doing so, natural light hits the filter, and the filter absorbs two thirds of the color spectrum in order to let through each of the three primary colors.

“If you think about it, this is a very inefficient way to get color because you’re absorbing two thirds of the light coming in,” Menon says. “But this is how it’s been done since the 1970s. So for the last 40 years, not much has changed in this technology.”

Menon’s solution is to use a color filter that lets all light pass through to the camera sensor. He does this with a combination of software and hardware.

Menon has designed a new color filter that is about a micron thick (100 times thinner than a human hair). It is a wafer of glass that has precisely-designed microscopic ridges etched on one side that bends the light in certain ways as it passes through and creates a series of color patterns or codes. Software then reads the codes to determine what colors they are.

Instead of just reading three colors, this new filter produces at least 25 new codes or colors that pass through the filter to reach the camera’s sensor, producing photos that are much more accurate and with nearly no digital grain. 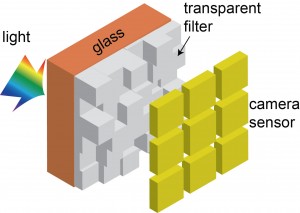 In this illustration, light passes through the new camera color filter developed by University of Utah Electrical and Computer Engineering professor Rajesh Menon before it reaches the digital camera sensor. Since all of the light reaches the sensor, unlike conventional digital camera filters where only a third of the light passes through, photos taken with Menon’s new filter are much cleaner and brighter in lowlight.

“You get a lot more color information than a normal color camera. With a normal camera, you only see red, green or blue. We can do 25 or more,” Menon says. “It’s not only better under lowlight conditions but it’s a more accurate representation of color.”

Ultimately, the new filter also can be cheaper to implement in the manufacturing process because it is simpler to build as opposed to current filters, which require three steps to produce a filter that reads red, blue and green light, Menon says.

This new technology not only will greatly improve consumer smartphone cameras, but it also can be used in industrial applications such as for robots, security cameras and drones. For example, it could be used for self-driving cars to help them better decipher objects on the road at night. Or it could be built into aerial drones for farming to better determine damaged crops.

“In the future, you need to think about designing cameras not just for human beings but for software, algorithms and computers,” Menon says. “Then the technology we are developing will make a huge impact.”

Menon first came up with the idea while trying to create a new kind of spectrometer, a device that reads the wavelength or frequency of light. He realized that converting spectral information to color for a spectrometer could be applied to color imaging. His research was funded by the U.S. Office of Naval Research and NASA and will be used in space to photograph near-Earth objects such as asteroids.

Menon has since created a company, Lumos Imaging, to commercialize the new filter for use in smartphones and is now negotiating with several large electronics and camera companies to bring this technology to market. He says the first commercial products that use this filter could be out in three years.