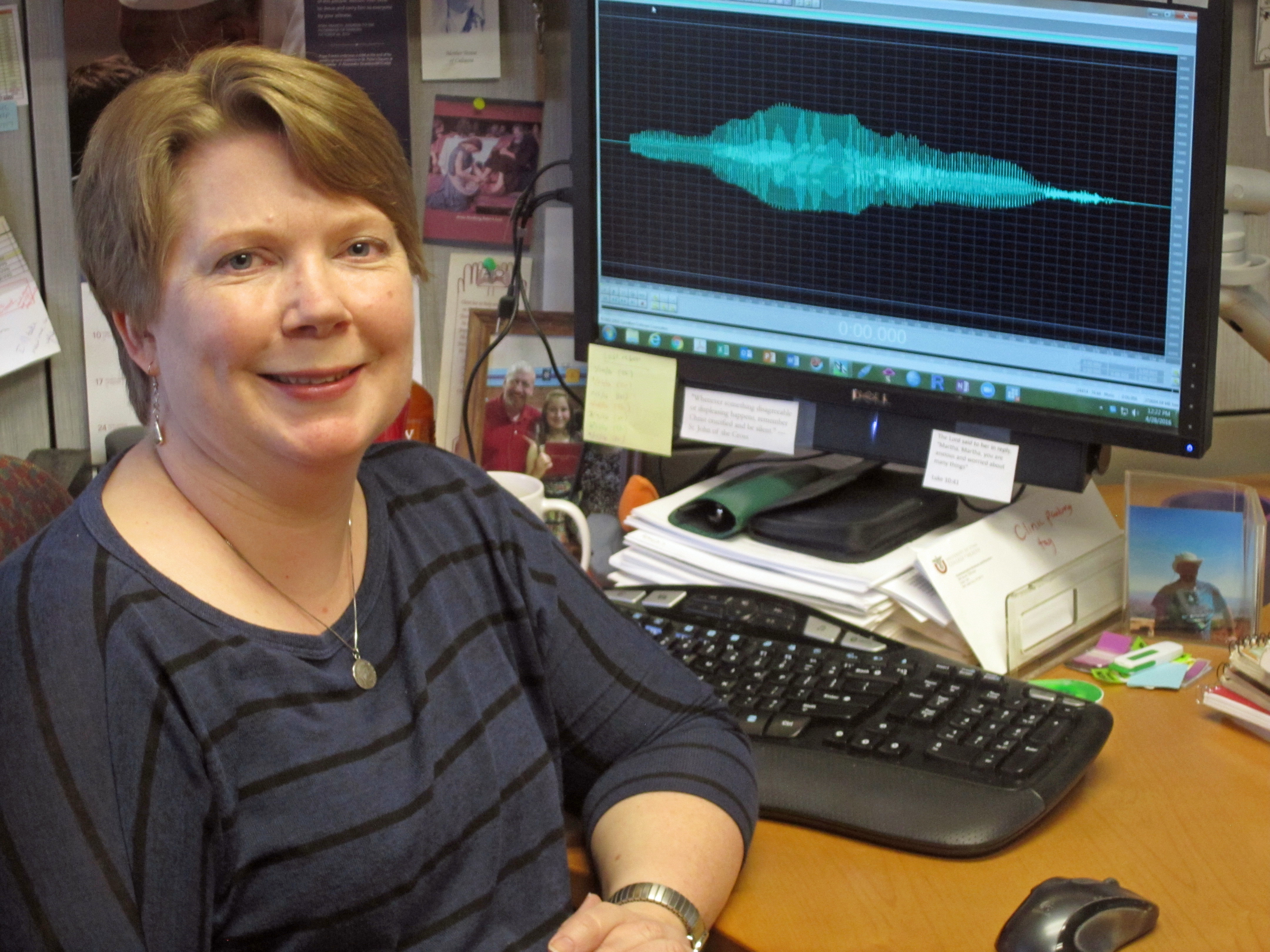 Older Americans with some hearing loss shouldn’t feel alone if they have trouble understanding British TV sagas like “Downton Abbey.” A small study from the University of Utah suggests hearing-impaired senior citizens have more trouble than young people comprehending British accents when there is background noise.

“The older hearing-impaired had just a little more trouble understanding British accents than American accents when they were in quiet surroundings,” says Sarah Hargus Ferguson, senior author of the study and an associate professor of communication sciences and disorders. “They had a lot more trouble understanding both accents with background noise, but the British was harder to understand than the American.”

“When young, normal-hearing listeners were in quiet, they did just as well with British English as with American English,” she adds. “When they had background noise, they had more trouble understanding both.”

That was among several studies presented this week by Ferguson and her students during the Acoustical Society of America’s 171st meeting at the Salt Lake Marriott Downtown at City Creek. Among other findings by Ferguson and students:

— People perceive clear speech as more feminine than conversational speech. So transgender women who want to sound more feminine might speak more clearly to do so. Clear speech is how people speak when they believe the listener is hearing-impaired – more slowly and loudly than normal, and with a higher-than-usual voice pitch.

— Older people hear less anger than younger people, but it isn’t due to hearing loss, but to some other aspect of aging.

— Fast talking makes speech less intelligible, more so if women rather than men are speaking quickly.

The common theme of the studies and of Ferguson’s research “is that things about the talker affect how other people perceive their speech,” she says. “Those include how clearly they are speaking, their gender and if they have an accent.”

The study of British accents was led by Caroline Champougny, a neurolinguist and visiting scholar at the University of Utah. The study involved 14 older people with hearing impairment and 14 young-adult university students with normal hearing. 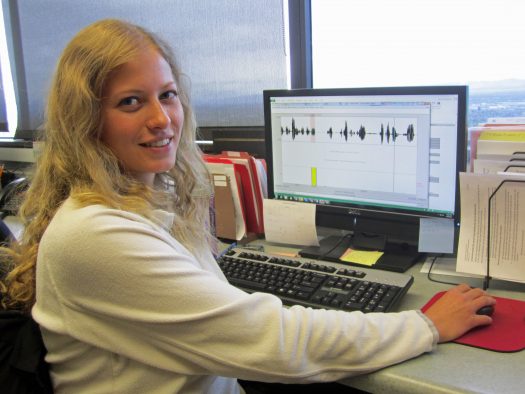 Caroline Champougny, a neurolinguist and visiting scholar at the University of Utah, conducted a small study indicating that older people with impaired hearing have more trouble than young people understanding British accents when there is background noise.

Each participant listened to recordings of Basic English Lexicon sentences – a list of simple sentences used for research – read by one American and one British talker. They heard them in quiet, and again with recorded background babble of 12 Americans.

“An older, hearing-impaired adult listening to American speech might be struggling, but most of the time they’re going to get the message,” Champougny says. “With British speech, they are struggling if there is background noise. They are impaired in their understanding of British English.”

Ferguson adds: “So if you’re watching ‘Downton Abbey’ and you’re having trouble understanding, it will help if you turn up the volume and eliminate background noise,” or even used closed captions.

Ferguson says the study grew from the observation that older, hearing-impaired patients in audiology clinic said “they couldn’t understand British accents anymore – they used to enjoy Masterpiece Theatre, but now it’s too hard for them to understand.”

Jaime Booz is a University of Utah master’s student in speech-language pathology and a transgender man. He says he intends to study “the relationship between communication and quality of life for transgender individuals.”

“Transgender women say sometimes they are doing fine in public until they open their mouth, because the voice is low,” Booz says. “That can be a safety issue because it opens them up to harassment and discrimination.” So he wanted to learn if “adopting a clear speaking style may be a means by which someone can sound more feminine.”

Seventeen participants – eight men and nine women – listened to 656 gender-neutral sentences (no male sports talk, for example) in conversational speech and in clear speech. The listeners rated each sentence on a 0 to 100 scale of masculine-sounding to feminine-sounding (not whether the listeners thought the speaker was male or female.)

“We found there was a small but statistically significant effect of clear speech on ratings on femininity,” Booz says. “When a talker used a clear speaking style, they were rated more feminine than when they used their regular conversational speaking style. The effect was slightly larger for male talkers than for female talkers.”

The study was small and clear speech had a small effect on femininity ratings, so Booz isn’t yet ready to make recommendations. But the possible implication is clear.

“I wanted to see if a speech-language pathologist could tell a transgender woman who is trying to sound more feminine to use a clear speaking style, and if that would increase her perceived vocal femininity. Based on my study, the answer is maybe.”

Does hearing loss impair the ability to hear anger?

Previous research has shown that both older hearing-impaired people and younger people with normal hearing are more likely to perceive anger in clear speech than in normal, conversational speech. University of Utah audiology doctoral student Shae Morgan ran a study suggesting the reason is not hearing loss, but another aspect of aging.

All listeners were asked to select the emotion, if any, that they heard in each sentence: anger, fear, disgust, sadness, happiness or neutral.

There was no difference between the normal hearing group and the simulated hearing-loss group: Both were about four times more likely to perceive anger in clear speech than in conversational speech.

What about aging? “There is a ‘positivity effect’ in older adults,” he says. “This is based on a theory that older adults show preference for positive stimuli and avoid negative information.”

Are faster-talking women tougher for older people to understand?

Eric Johnson, a University of Utah doctoral student in audiology, wanted to determine how fast people talk was a factor. He found it was.

Johnson and Ferguson used recordings of sentences from two male and two female speakers in the Utah Speaking Style Corpus, a collection of recordings of Utah residents speaking in clear and conversational styles. 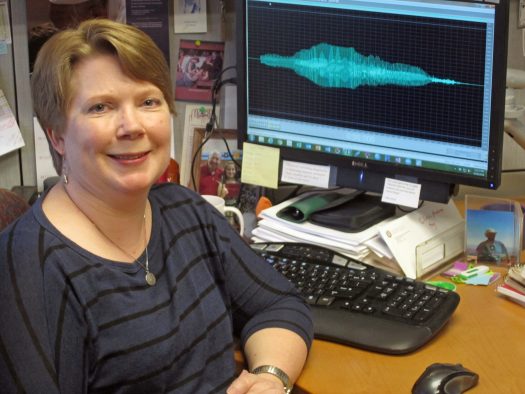 Sarah Hargus Ferguson is an associate professor of communication science and disorders at the University of Utah. She led a series of studies with her students that were presented at the national meeting of the Acoustical Society of America in Salt Lake City. The studies dealt with how British accents can confuse older people with hearing impairments, how fast talking can impair intelligibility, and how listeners perceive gender and anger in people’s voices.

Thirty-two student participants “listened to 60 sentences spoken by one of the four talkers,” Johnson says. “That talker was either a male or a female, and the speech was either 50 percent faster than normal or the normal rate of speech.” A computer program was used so the sped-up speech did not have a higher pitch, but was just 50 percent faster at the normal pitch.

“When we sped up the speech, it made it harder to understand regardless of whether the talker was male or female,” Johnson says. “However the negative effect on intelligibility was stronger for female talkers; men and women both became less intelligible when the rate of speech was increased, but women became even less so.”

“The results also imply that audiologists should counsel communication partners of patients to avoid speaking excessively fast, especially in noise and especially if the patient complains of difficulty understanding women’s voices,” Johnson concludes.