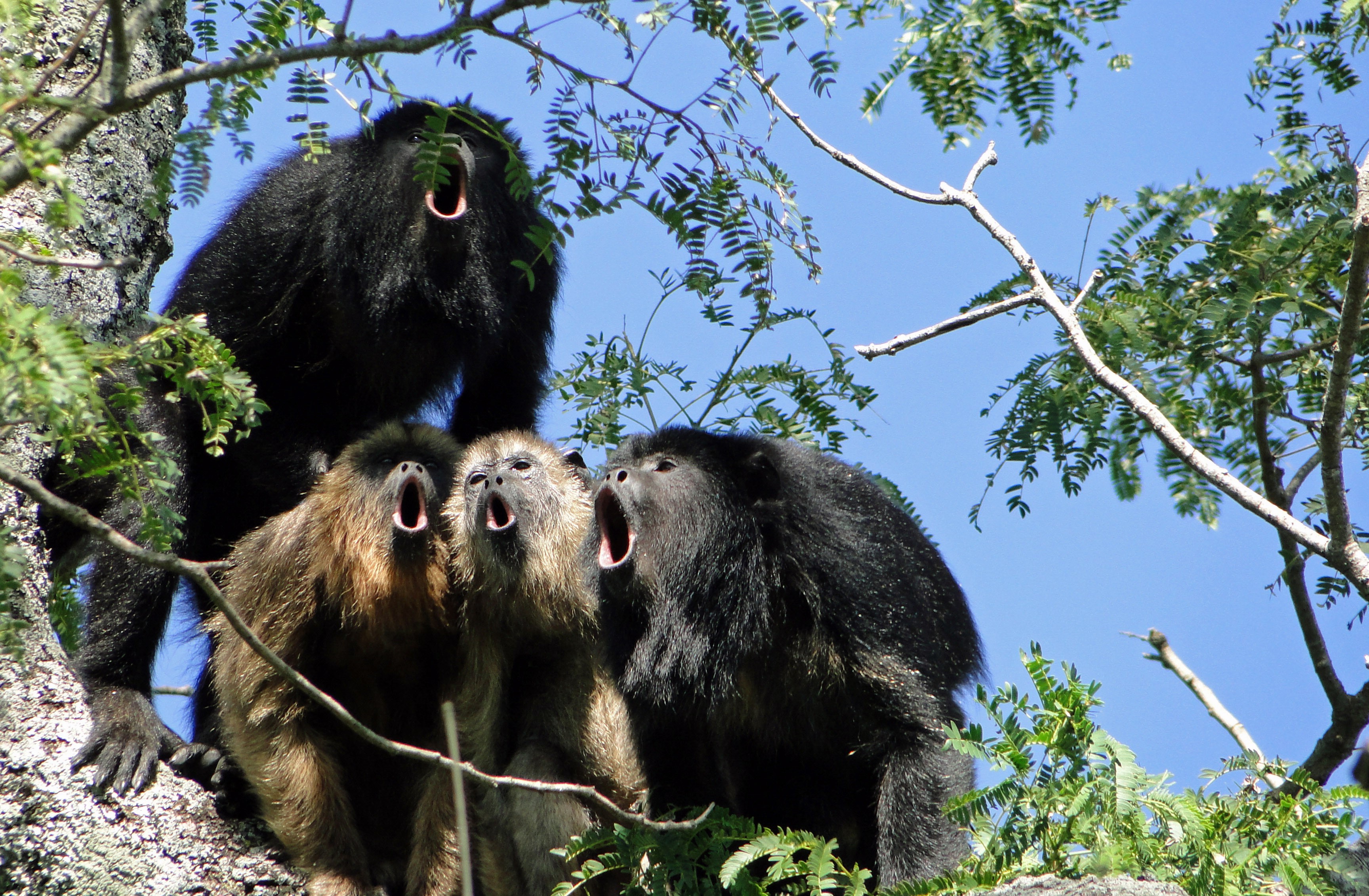 Oct. 22, 2015 – Across the animal kingdom, males hoot and holler to attract females and ward off competing suitors. Now, a new study finds that male howler monkeys with deeper calls have smaller testicles – and vice versa, according to researchers from universities of Utah, Cambridge and Vienna and other institutions.

In the cover story of Current Biology’s new issue, the research team provides the first evidence of a tradeoff between two traits evolved by different howler monkey species so that males could mate with females and pass their genes to offspring: large gonads to make more sperm, or a large vocal-tract hyoid bone to produce a deep call that scares competitors and attracts females – similar to how women like deep male voices.

“They are different solutions to the same problem,” says Leslie Knapp, professor and chair of anthropology at the University of Utah and one of the study’s two senior authors. “It is not possible to produce a large hyoid and large testes. This probably arose because individuals within one species produced more offspring if they had large hyoids. And in another species they were more successful if they had large testes.”

“The idea has been around since Charles Darwin, but this is the first time that anyone actually has demonstrated a trade-off between vocal characteristics before mating and sperm competition after mating,” she says. “Our study shows that Darwin was probably right when he suggested that the roars of howler monkeys are important for reproduction.” 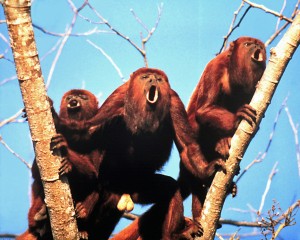 Researchers used 3-D laser scans to calculate the volumes of 255 cup-shaped howler monkey hyoid bones from museums in the United States and Europe. To confirm the scans were accurate, the team made CT and MRI images of two adult male howlers.

Data on testicle sizes for 66 howler monkeys were collected from published literature, but Knapp says researchers visited zoos in Brazil and Germany, using calipers to measure testes of 21 more monkeys while the animals were sedated for health exams.

“This was a very serious business because the monkeys were passive – but not that passive,” Knapp says.

A tactical tradeoff: Testicles or tone?

Male howler monkeys are unusual among primates in that they have an enlarged hyoid bone in their voice box that acts like an echo chamber to amplify sounds. All howler monkeys howl to communicate with each other, but some species are able to howl more loudly and more deeply. Monkeys with larger hyoids produce louder, deeper calls, suggesting a larger body size, which indicates an ability to get food and resources.

But the hyoid is an energetically expensive organ to make, so males that grow large hyoids may have to compensate by having smaller structures elsewhere. To test this idea, the researchers analyzed data on hyoid volume in nine of 10 howler monkey species, social group sizes in eight species and testes volume in five of those species.

“We found that males with larger hyoids, who can make lower-pitch vocalizations, have smaller testes and live in single-male groups with a harem of a few females,” Knapp says. “Males with smaller hyoids live in multimale groups and have larger testes.”

In a group where multiple males are mating with the same female, a male is likely to sire more offspring by simply making more sperm than the other males, allowing repeated mating and increasing the odds of fertilizing an egg. 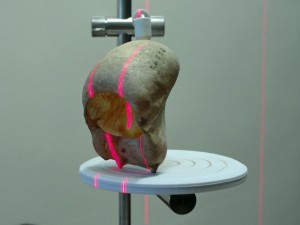 In species where a male lived with a harem of females and had exclusive access to them, the low-pitched voice should be more important than large testicles for siring offspring, because “once he has the females, a single male doesn’t face much sperm competition,” Knapp says. “A large hyoid might make a male more attractive to females or make other males think he is large and scary, which may be the best way for him to keep his harem.”

Why does evolution lead to a tradeoff between a larger hyoid and smaller testes, rather than a smaller heart, liver or foot? “Your liver or kidney or toe doesn’t contribute to your having a mate or the possibility of more offspring,” says Knapp, who refers to the study as her “calls-and-balls paper.”

Howler monkeys are 12- to 16-pound New World monkeys in the genus Alouatta (al-oo-watt-tah) and live in Central and South America. They have some of the loudest and deepest voices of the animal kingdom. Although they are only the size of a medium dog, their roars are as loud and deep as an animal the size of a tiger.

The secret is the hyoid bone, which is greatly enlarged in howler monkeys but not in other primates. Humans also have a hyoid, but we use our vocal folds (commonly known as vocal chords) to control sound quality.

Males in other species sometimes use ornaments such as peacock tail feathers to attract females, or weapons like deer antlers to fight competitors. But the researchers hypothesized that male howler monkeys used vocalizations to attract mates and-or compete with each other. 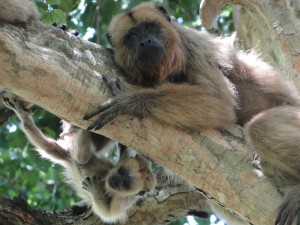 A mother and baby of the howler monkey species Alouatta caraya.

The researchers found that within a howler monkey species, male hyoids are three to eight times larger female hyoids. And between species, “the biggest males have hyoids that are 10 times larger than the smallest males,” Knapp says.

“To us, calls with reduced formant spacing sound deeper and louder,” Knapp says. “To a howler monkey, these calls give an acoustic impression of large body size.”

The researchers also considered an alternative hypothesis: hyoids might be adapted to produce different vocalizations in different habitats. But an analysis of the lushness of landscapes where howlers live found no support for this idea.

In the future, the researchers want to measure hyoid and testes volume in individual males of the same species to determine if the relationship that they found between species also holds between individuals.

In contrast to howlers’ hyoid bones, tiny hyoids in humans may have been necessary for delicate larynx movements needed for the development of language.

Knapp cautions that it is hard to compare directly with humans, since unlike howler monkeys, we have miniscule hyoids and don’t use them to produce sound. But she says there is some evidence voice quality similarly affects human mate preferences.

“Females of our own species tend to find deeper voices, like soul vocalist Barry White’s, more attractive and romantic,” Knapp says. “Deeper voices are thought to reflect a larger body size, which could represent a good choice for a mate.”

Despite the lures of Barry White, a deep voice and testes size aren’t so important in our species. Knapp says: “Human males try to show a female what their value is with other things: resources, care of offspring and other attractive characteristics like being successful in business or driving a fast, flashy car.”

Audio: A recording of Alouatta sara is here. If it doesn’t work, try another browser:

A chorus of howler monkeys of the species Alouatta caraya.