How the brain detects short sounds

Study unveils a key part of animal and human communication 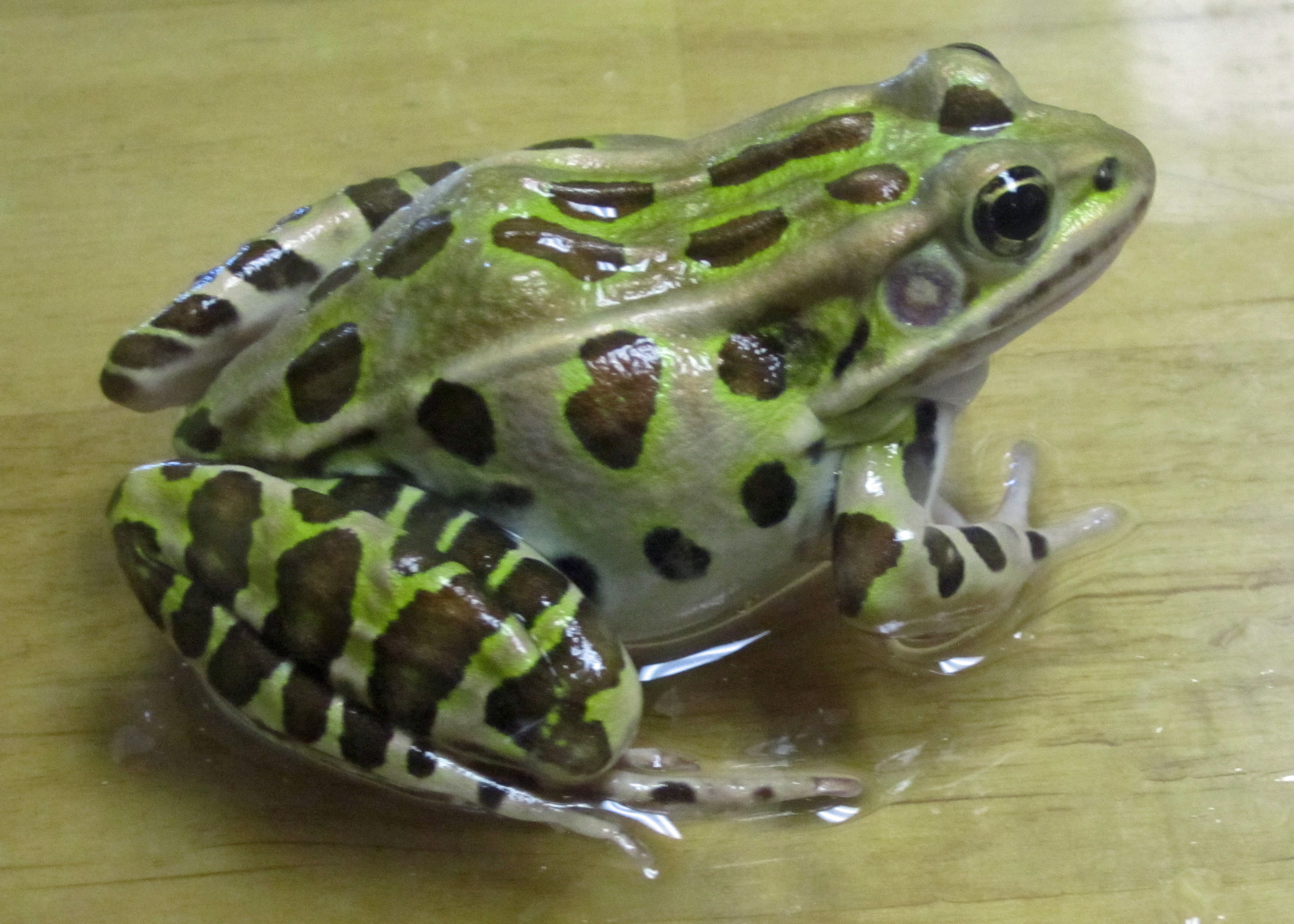 For humans to understand speech and for other animals to know each other’s calls, the brain must distinguish short sounds from longer sounds. By studying frogs, University of Utah researchers figured out how certain brain cells compute the length of sounds and detect short ones.

In addition to pitch and loudness, “sound duration is of universal importance,” says biology professor Gary Rose, senior author of the study published today by the journal Proceedings of the National Academy of Sciences. “It’s important in frogs. It’s important to humans. It’s important to all animals that use sound to communicate.”

Researchers long ago discovered that different neurons or nerve cells in the brain “selectively respond to sounds of a certain duration,” he says. “But we didn’t know until now how they computed the lengths of sounds.”

Rose and neuroscience doctoral student Rishi Alluri used a novel combination of recording electrical activity of single brain cells and blocking neurotransmitter chemicals that carry nerve signals from one nerve cell or neuron to the next. It was already known that short sounds are discriminated from longer sounds by individual brain cells in the inferior colliculus, the auditory part of the midbrain.

The researchers found that for a frog brain cell to recognize a short sound, it is inhibited from firing a nerve signal while the sound is occurring, then is excited into firing when the sound ends. For longer sounds, the cell is inhibited for a longer time and that counteracts the excitation, so the cell doesn’t respond to longer sounds.

“This integration of excitation and inhibition in the brain is a critical component of the ability to distinguish between communication sounds,” Rose says.

For example, without this mechanism, people wouldn’t be able to distinguish that the first syllable is shorter than the second in a word such as “papa” [sounds like pa-pah], says Alluri, the study’s first author.

When this process goes wrong, the result can be disorders in speech recognition, such as when older people have trouble recognizing speech even when hearing aids amplify incoming sounds.

“It is believed that age-related deterioration in speech recognition is, to a large degree, a consequence of imbalances in excitation and inhibition of neurons involved in hearing,” Rose says. “You can fit people with hearing aids that amplify the sounds, but they still have trouble with speech recognition because of processes in the brain.” 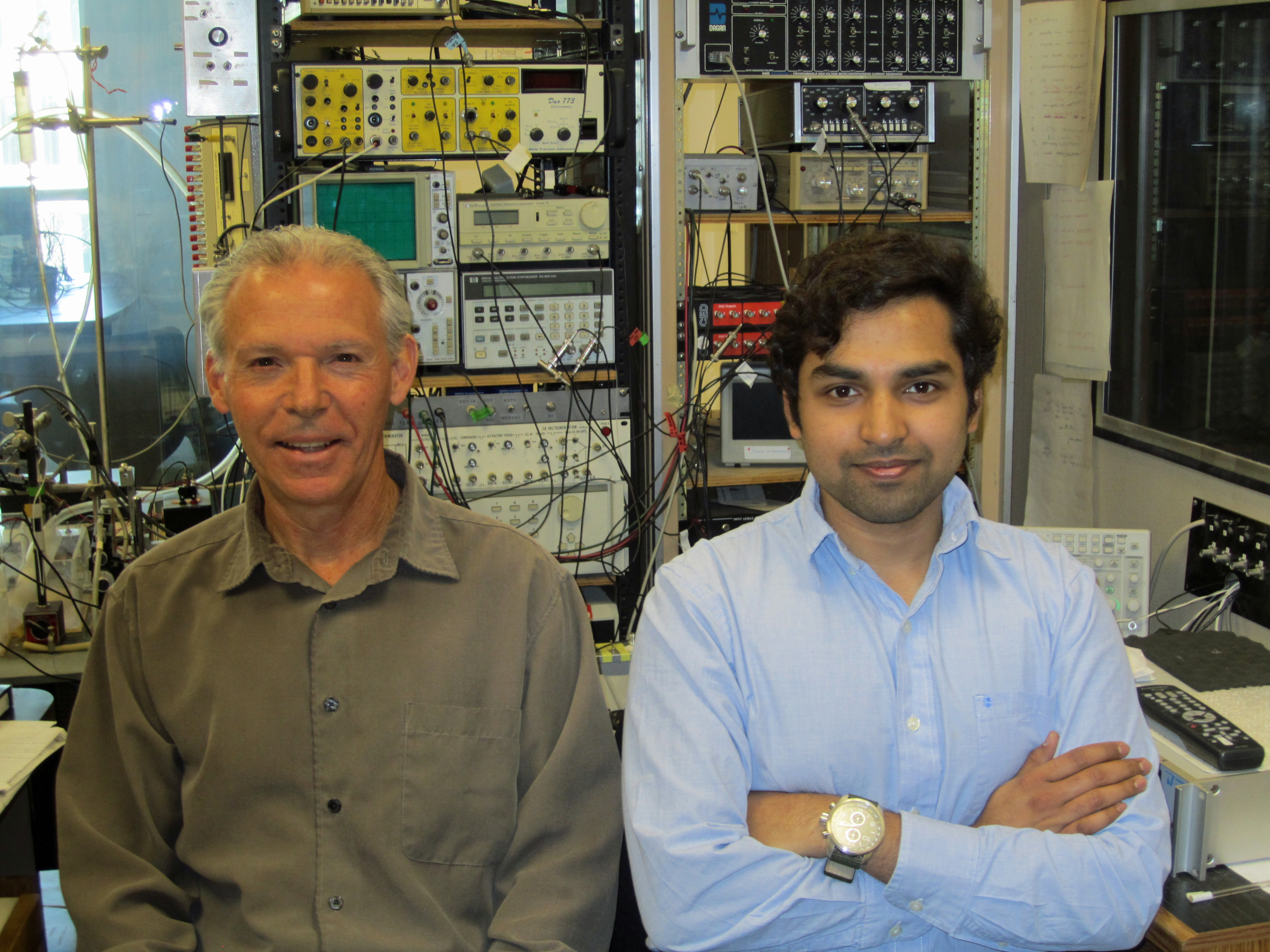 University of Utah biology professor Gary Rose and neuroscience doctoral student Rishi Alluri with some of the equipment they use to measure electrical activity in the brain cells of frogs. Their new study reveals how single brain cells or neurons compute the duration of sounds — something necessary for human speech recognition.

The study was funded by the National Institute on Deafness and Other Communications Disorders. Rose and Alluri conducted the research with University of Utah biology postdoctoral fellows Jessica Hanson and Christopher Leary, research specialist Gustavo Vasquez-Opazo, undergraduate and technician Jalina Graham and doctoral student Jeremy Wilkerson.

The new study combined two methods: So-called “patch recording” of tiny voltages in single frog brain cells and how the voltages change in response to sounds of different lengths, and the administration of drugs that block neurotransmitters – a way to learn how brain cells respond to sound with and without the normal neurotransmitters.

“We were able to develop this very novel method to go to a single neuron and manipulate how it computes” by using drugs to block neurotransmitters at the level of a single nerve cell in a frog brain, and then measuring what happens to that neuron in response to frog calls, Alluri says.

Also, frog call frequencies fall within the range people hear, and the frequencies used by leopard frogs are those at which people can hear the quietest sounds, Rose says.

During the study, a single electrode measured activity in a single frog neuron while the researchers used a computer to generate various parts of frog calls – from a complete call down to a single short sound or tone from the call.

The method made it possible “to record or measure millivolt – thousandths of a volt – changes in the cell,” Rose says. “It’s very difficult to do this because of the minute size of the neurons,” which are roughly one-tenth as thick as a human hair.

After measuring millivolt changes in 58 brain cells in frogs in response to sound, the researchers used a mathematical model to convert the information into how much a brain cell was excited or inhibited by a given sound pulse.

Incoming sounds produce chemical nerve signals that can excite a neuron to fire a new signal or inhibit it from firing.

The researchers administered drugs to block neurotransmitters common to humans, frogs and other animals: GABA-A, which is responsible mainly for inhibiting nerve cells from firing, and glutamate receptors (AMPA and NMDA), which are involved primarily in exciting neurons to fire.

For example, by blocking GABA-A – which normally inhibits nerve cells – the inhibition of frog brain cells was decreased, so the cells responded to sounds of all durations, not just short sounds.

“Frog neurons, like those in people and other animals, receive the same type of chemical inputs, but it’s been a major challenge to understand how they work together to enable to enable the neurons to compute the length of a sound,” Rose says.

“To distill it down, these studies allowed us to reveal the timing relationships between excitation and inhibition [of brain cells] that are critical for making this computation” of how long a sound lasts, Rose says.

Specifically, the experiments showed that when a brain cell responds to a short sound, the cell first is inhibited from firing for as long as the sound lasts – a new discovery – and then is excited so it can fire. There is minimal overlap between the time the neuron is inhibited and excited, so this is known as the “anticoincidence mechanism.”

University of Utah researchers used leopard frogs like the one shown here to measure tiny voltages from single brain cells and learn how those cells learn to detect short sounds. Distinguishing short sounds from longer sounds is essential for humans to understand each other’s speech and for animals to recognize each other’s calls.

The researchers also found that in nerve cells that detect short sounds, that ability is amplified by electrical properties of the nerve cell membrane’s ion channels, which allow the entry and exit of charged chemicals.