Thanks to the discovery of a new material by University of Utah engineers, jewelry such as a ring and your body heat could generate enough electricity to power a body sensor, or a cooking pan could charge a cellphone in just a few hours.

The team, led by University of Utah materials science and engineering professor Ashutosh Tiwari, has found that a combination of the chemical elements calcium, cobalt and terbium can create an efficient, inexpensive and bio-friendly material that can generate electricity through a thermoelectric process involving heat and cold air. 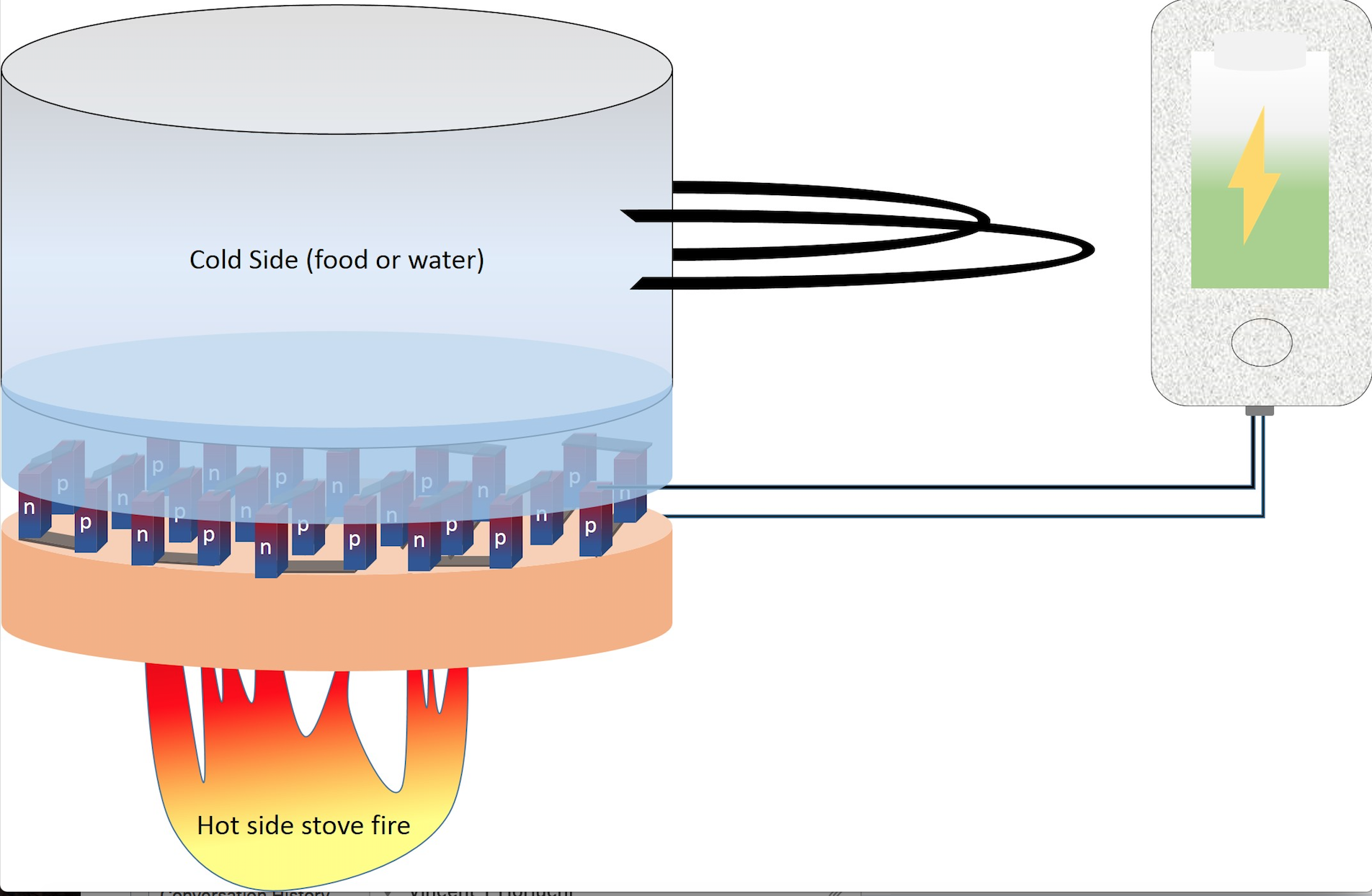 University of Utah materials science and engineering professor Ashutosh Tiwari and has team have an inexpensive and bio-friendly material that can generate electricity through a thermoelectric process involving heat and cold air. In this graphic, the heat from a hot stove, coupled with the cooler water or food in a cooking pot, could generate enough electricity to charge a cellphone.

Their findings were published in a new paper March 20 in the latest issue of Scientific Reports. The first author on the paper is University of Utah materials science and engineering postdoctoral researcher, Shrikant Saini.

For years, researchers have been looking for the right kind of material that makes the process more efficient and produces more electricity yet is not toxic. There are other materials that can generate power this way, such as cadmium-, telluride- or mercury-based materials, but those are toxic to humans. The unique advantage to this new material by Tiwari’s team is that it is inexpensive to produce and, mostly importantly, bio-friendly and eco-friendly while still being efficient at generating electricity, Tiwari says. Therefore, it could be safe to use with humans.

“There are no toxic chemicals involved,” he says. “It’s very efficient and can be used for a lot of day-to-day applications.”

The applications for this new material are endless, Tiwari says. It could be built into jewelry that uses body heat to power implantable medical devices such as blood-glucose monitors or heart monitors. It could be used to charge mobile devices through cooking pans, or in cars where it draws from the heat of the engine. Airplanes could generate extra power by using heat from within the cabin versus the cold air outside. Power plants also could use the material to produce more electricity from the escaped heat the plant generates.

University of Utah materials science and engineering professor Ashutosh Tiwari and his team have an inexpensive and bio-friendly material that can generate electricity through a thermoelectric process involving heat and cold air. The material (the black blocks between the two plates pictured) could be used with cooking pots to charge phones or jewelry to power health sensors.

“In power plants, about 60 percent of energy is wasted,” postdoctoral researcher, Saini, says. “With this, you could reuse some of that 60 percent.”

Finally, Tiwari says it could be used in developing countries where electricity is scarce and the only source of energy is the fire in stoves.

The Technology & Venture Commercialization Office of the University of Utah has filed a U.S. patent for the material, and the team will initially develop it for use in cars and for biosensors, Tiwari says.

In addition to Tiwari and Saini, co-authors on the paper include graduate students Haritha Sree Yaddanapudi, Kun Tian, Yinong Yin and David Magginetti.

University of Utah College of Engineering