“I said ‘thank you’ to him in Chinese and he smiled,” says Stang, recalling the Jan. 8 award ceremony in the Great Hall of the People on Tiananmen Square in Beijing. 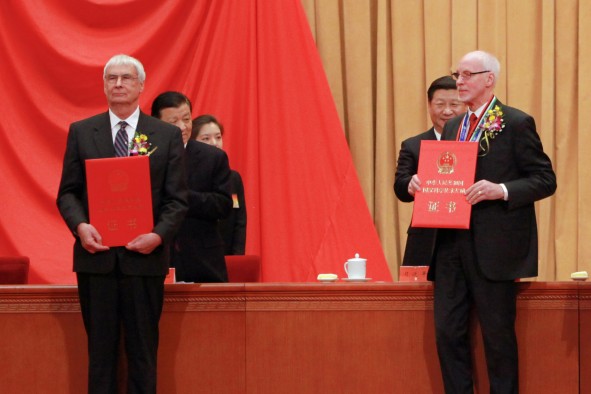 University of Utah chemist Peter J. Stang (left) and Swedish scientist Jan-Christer Janson on stage Jan. 8, 2016, in the Great Hall of the People in Beijing, as they accept China’s International Science and Technology Cooperation Award. They were among seven winners. Chinese President Xi Jinping stands behind Janson on the right, while standing behind Stang are Liu Yunshan, first-ranked Secretary of the Central Secretariat of the Communist Party of China, and a staff member.

Stang – a University of Utah distinguished professor of chemistry and former dean of science – now has been given major awards and shaken hands with leaders of the world’s two most powerful nations: Xi after the recent award and U.S. President Barack Obama in 2011, when Stang was honored with a National Medal of Science.

“I’m a scientist. I’m not very emotional,” Stang says. “It was a nice whatever, but I was cool as a cucumber. I felt good obviously, and I felt honored.”

Video of Stang shaking hands with Xi was captured by CCTV, the primary television broadcaster in China.

The event in the Great Hall featured a number of awards for Chinese people and officials as well as for the seven International Science and Technology Cooperation Award winners, six of whom attended. 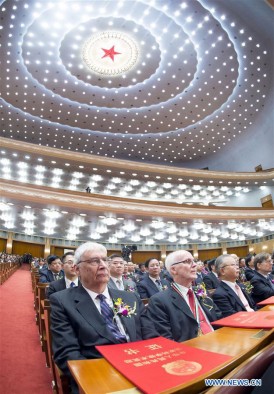 University of Utah chemist Peter J. Stang (on aisle) sits in China’s Great Hall of the People on Jan. 8, 2016, during a ceremony in which he was awarded that nation’s International Science and Technology Cooperation Award.

This is Stang’s second big award from China in recent months. Last fall, he went to China to accept the 2015 China’s Friendship Award, which is that nation’s “highest award for foreign experts who have made outstanding contributions to the country’s economic and social progress.”

He has collaborated in research with Chinese scientists, worked closely with them as editor of the Journal of the American Chemical Society and served as a foreign member of the Chinese Academy of Sciences.

Stang is a pioneer in supramolecular chemistry – the spontaneous formation of large, complex molecules from predesigned building-block molecules. Such molecules have uses in cancer treatment, drug delivery and oil refining.

University of Utah organic chemist Peter J. Stang (front row, fourth from right) stands with other winners (wearing gold ribbons with medals) of China’s International Science and Technology Cooperation Awards and a number of officials in the Great Hall of the People in Beijing on Jan. 8, 2016. At center in blue jacket is Liu Yandong, vice premier of the People’s Republic of China.

The latest honor from China is among a long list of Stang’s prizes, including the 2013 Priestley Medal, the American Chemical Society’s highest award. 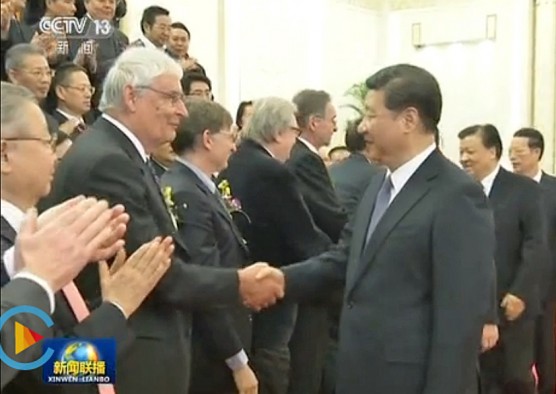